Are you looking for unbiased Trading Everest review? Then read on. This software has been around for quite some time now, but it seems as if its sales team has recently regained momentum. We decided to take a closer look at it when we received an email asking us to give it a try for free. The Trading Everest software is allegedly a trading signals service which provides near accurate prediction of winning and profitable trades. The sales video cranks up promises of making huge profits starting from the moment one signs up and starts using the Trading Everest software. Come, let us test the waters and analyze whether or not the Trading Everest system is believable or not. 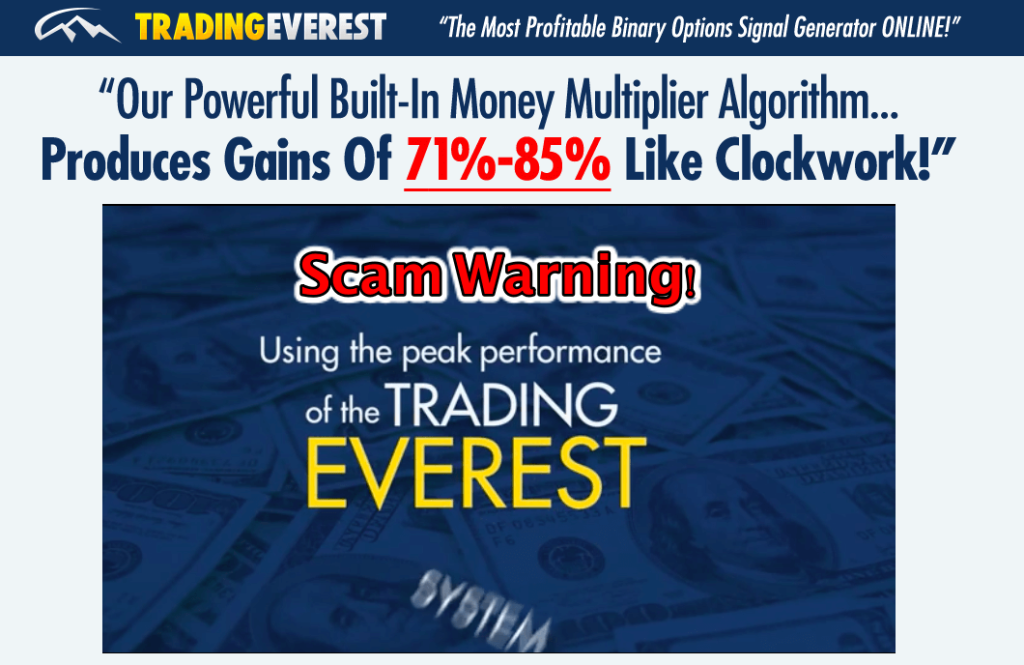 The Trading Everest Software – What is it?

We are introduced to the Trading Everest software by one of its co-founders Jason Gaines. Jason, whose surname itself sounds similar to “gains,” tells us how the software if given a chance could turn things around in no time for its users. As Jason tells us, he has been involved in trading binary options for the last four years prior to which he worked at the NYSE for a prestigious Hedge Fund. He tells us how he joined forces with a high-school friend named Chris and they developed the software which Jason named as the Trading Everest software.

The Trading Everest app allegedly has the same screening criteria as Wall Street’s elite hedge fund managers use. Jason and Chris have duplicated these high powered trading programs, we are told. In short, a proprietary money-multiplier market screening system is up for grabs along with the super-fast Trading Everest software. Software which delivers a fantastic rate of 9 successful trades out of 10, that’s the Trading Everest system for you.

What do you stand to earn using the Trading Everest?

We are also given a glimpse of Jason and Chris’ earnings when we are told that in the past three months, they have raked in $4,50,600 and $2,78,000 respectively. These figures are too good to be true, but it is how it is seen in the video. Let us warn you straight that we did not find any software in our many years of reviewing auto-trading software which could legitimately make that kind of money.

How does the software work?

In the presentation, Jason lends us a glimpse of the working of his software. The Trading Everest scam software allegedly scans the major exchanges of the world to “cherry pick” the best possible winning signals. These money signals are determined using a scientific screening system called the ‘money multiplier.’ A series of math formulas and equations help to accurately and reliably notice when a potential winning trade is peaking. Using the concepts of Statistics, Probability, and past trading patterns, the program uses certain indicators to trigger when a certain trade would near its “trade peak potential” or TPP. When the chosen trades reach their maximum “TPP,” they have another indicator to alert of the upcoming window of opportunity.

Jason asserts that even trades that many investors would call excellent are rejected, and you are left with the real money makers. Such trades that could give you gains with limited risk are chosen by the software.

The Trading Everest Software is a SCAM!

Here comes the most important part of our Trading Everest review. While watching the presentation, we really wanted to see the faces of such brilliant minds that have discovered the key to transforming $200 into hundreds of thousands of dollars within a span of three months! As we trudged past the presentation, we forced ourselves to watch it till completion while we had already come to know of its scam nature. All the different figures and statistics are reason enough to discard this system as 100% scam.

If you have ever traded in binary options in your life, you would know for sure that the enormities of profits that have been so shamelessly claimed in the presentation are just far-fetched fantasies.

Who are Jason Gaines and Chris?

We are told how Jason was a successful trader himself and used to earn a six figures salary. But, his work pressure and commitments took a toll on him, and he resigned from his job. He teamed up with his school friend Chris who was doing an “Advanced Study of Statistical Analysis.” In as much as the course name is unheard of, we could not verify the details of Jason or Chris. In every possibility, the scammers just devised fictional names and christened Jason’s surname as “Gaines” because it is exactly what they are after. They didn’t even bother to tell us Chris’ full name.

False Timer is a dud!

Once we land on the homepage of Trading Everest website, a counter of 30 minutes greets us. It in a way indirectly “threatens” to snatch away our chance of getting an additional 30 days trial of the software over the default 30 days time if we fail to register within that time. We held our breath for 30 minutes and let the timer run its course. We were suffocated to see that nothing happened after 30 minutes and we still were able to get to the next page without any difficulties. Such tricks have long been employed by scammers to drive the visitors to do silly things in a hurry.

No Testimonials for a change!

We are surprised how the scammers did not use their age-old formula of showing false and made-up testimonials on their Trading Everest website. It is no short of a norm that we see happy faces with wide smiles and beside them their confessions of how their lives changed for good after using the trading software. But, in this case, the scammers have given the testimonials a miss. Guess that is the only new “idea” they could think of to introduce some novelty to their scam concept.

Verdict – Trading Everest seems to be another scam. Avoid It!

Best Binary Options Robot With An Average ITM Rate of 84%

The Trading Everest software would not take you to the top of mountains of money that it allegedly claims to make for you. Rather, it is a software purposefully built to drown your investments. Once you signup and invest money for kick starting your trading, that money would find its way into the pockets of the scammers and their associates – the brokers. You should also check my Agora Financial review if you are looking for good investment opportunity. So, it’s in the best interest of your trading journey that you make your decisions wisely starting from the selection of software itself. We do not recommend you to try the Trading Everest scam no matter for how many months they give it to you for free.