What brings you to our Tesler review today is curiosity to know about the Tesler App. It is the latest in series of auto-trading software which is eying to take over the trading world. Let us warn you straight away, DON’T TRUST them. The Tesler App is a pure SCAM software built to scoop up your money.

The App allegedly works on “Lead Pattern” algorithm. This algorithm is unheard of in trading circles and virtually non-existent. Even Google does not have any mention of this algorithm. The website featuring this App is also a live example of how desperately the scammers want your email id so that they can spam you. You are shown dreams of earning mind-boggling profits and this is how they want to trick you to hand over your details to them.

Somewhere on the website, it is mentioned that the App makes use of powerful Mainframe systems. Mainframes are the backbone of all the computing in the banking and financial industry. Just projected as an Auto-trading robot, this App is said to make use of the vast computing power and speed of mainframes to process trading data. The App is capable of making use of the millions of market variables and their analysis made by the computers and translates them as pure profits. The promotional video introduces a person named Steven Abrahams as the CEO of Tesler Investments company. A rather eye-popping statistic is also thrown our way. It says that of the $7.8 trillion worth of daily trade that happens, this App carves out a small portion of it as your profits.

The claims sound just outrageously hyped up in the presentation. Steven is personally worth over $380 million, who makes someone a millionaire every day! What was so special for them to choose 20th December 2016 to unveil their scam product : we just don’t know. A person owning a $673 Million company, driving on his own and visiting the homes of the new users? It just doesn’t seem normal. What is his personal gain in doing all this? Why would a millionaire have time to gatecrash and arrive unannounced to his ‘students’ homes? Again this is abnormal. To offset this oddity, the scammers introduce a clause of making a 0.5% cut daily on your profits after the first 41 days. This is done to introduce that they too have some purpose and interest in making us rich.

You are fooled into believing that the Tesler App can make over $237 per hour. A string of such fake stats keep coming your way. $5,000 per day, over $1,00,000 within six months or hundreds of dollars within 5 minutes of testing the App; the claims are outright lies. We decided to expose this scam quickly so that no one could fall prey to such baits. We’d reiterate that you should beware of trading robots or such similar software which try to trick you. The age old formula of invoking greed and hopes of bright times ahead, sadly did not work for us.

Any naive user would surely be able to use the Tesler App and become a Pro quickly! Why not, there’s just nothing in the software at all other than easy to use malicious code. 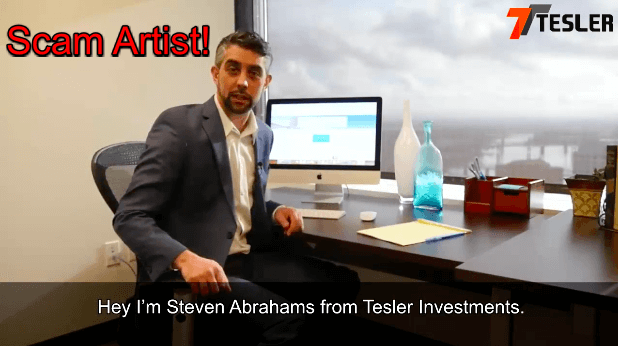 When we watched the video, we got a little suspicious. Of the so many scams we expose and so many actors we’ve watched, it can get tricky to remember at once. Mr. Tesler aka Mr. Midas, the so called CEO and primary funder of this App also appeared in many other scam systems. What can be a more solid proof to expose them than this one. We did not care to investigate who the real persons appearing in the video or testimonials are. It was enough for us to have caught the fake CEO. Moreover, those images which are listed as happy members of Tesler app are just stock photos which are stolen from other websites.

Steven narrates how he invested over $50 Million to get the software developed from 4 Advanced LLC. That in itself is an outrageously high payment and nothing more than another big fat lie. It is mentioned that massive amount of calculations in 8/100s of a second and analysis of the past 60 minutes of world events leading up to the trade happens. This is just a made up story to make you believe that the software is really sophisticated. The testifiers deliberately speak of their incomes upto the last cents to render ingenuity to their figures. Don’t fall for this ploy.

How the SCAM works?

An annoying Live Update keeps on popping all through the video. That the Tesler App would be given just to 10 more people, is nothing more than the boring old game plan of scammers. During the video, the spots would keep on decreasing. You know what- The spots will just never fill up, you would see the same number of spots or maybe even more when you visit their website in a few days. After scamming their target number of people, they would be nowhere to be found. This is nothing new, all scams operate this way. You won’t be able to withdraw any profits within 1 minute of making it. The truth is there won’t be any profits.

These scams work by trapping people and referring them to unscrupulous brokers. These brokers are neither Licensed nor regulated. The ‘cut’ that Steven is referring to in the video, comes from these brokers. Your email id, phone numbers that you filled up in the forms may be used to spam you. Do not share your personal details anywhere without thorough research.

Thanks for reading my Tesler app review carefully. There is not a single shred of truth in all what you get to listen or see in the Tesler App video. That’s just a script which Steven is mouthing and we can see all through it. The Tesler Trading App is completely designed to scam you, so we recommend you do not fall for Tesler App scam.