Quantum Code is a very misleading automated binary options software that is claiming that you can make $1,892,460 (around two million dollars) every month just by making a little investment of around $250 as initial deposit into the broker account. If you are thinking to try this binary options auto trader, then we recommend you to spare your 5 minutes to read this Quantum Code review completely. 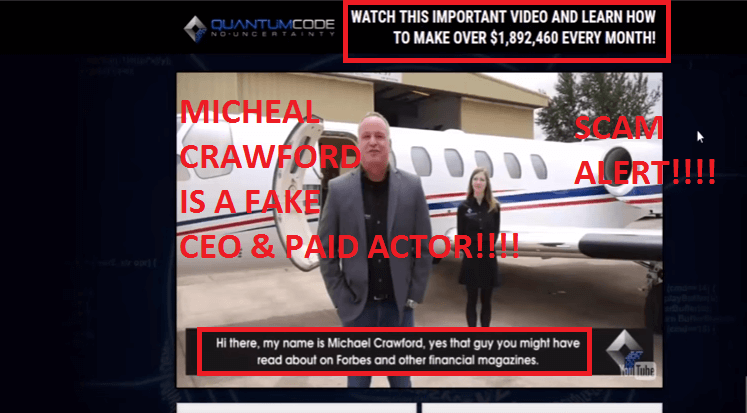 It’s a recently launched binary options auto-trader software which is presented by Michael Crawford. He claims to be a philanthropist and famous millionaire who is known with different nicknames in the trading business like “The Millionaire Trader”,  “The nicest Rich guy in the World” etc. He made many fake claims in the pitch video like he got featured in popular financial magazines like Forbes. He had also tried his best to lure traders by showing weekly earning reports in which ROI% followed by Net profit was unrealistic.

Well, Quantum Code is a confirmed SCAM which is just trying to lure traders with the help of fake promises. Read this unbiased and honest Quantum Code review till end to know some of the facts about Quantum Code that are enough to prove this system a scam.

You might be wondering what different things are done by Quantum Code in comparison to other trading systems that it helps you in earning this much amount. To be frank, we didn’t find any good explanation about how this software work. Micheal mentioned that they are using highly revolutionary algorithm named as Near Quantum Speed (NQS) technology which does not exist actually. Basically, Mr. Michael Crawford used some complex terms in their pitch video to impress traders as there was nothing to told about Quantum Code Scam which is not fabricated.

So, let’s move on to Quantum Code review points which will give you many reasons to stay away from Quantum Code Scam.

In the pitch, Micheal mentioned that he is very rich personality and is featured on popular financial magazines like Forbes, but when we tried to find about him on the internet. We didn’t find anything which confirms his existence and the following statement. What we found is an article written by Michael B. Crawford, who is an editor at the New York Times and he is not a millionaire.

According to him, he is a CEO and owner of the company named as Quantum Code. But when we started looking for this business and its registration we didn’t find anything. We tried to find about Quantum Code company as well, but as expected it does not exist in this world.

All these things raises a big red flag on Micheal and his software – Quantum Code.

Did you notice the User Count Widget on the Website? It is Fake 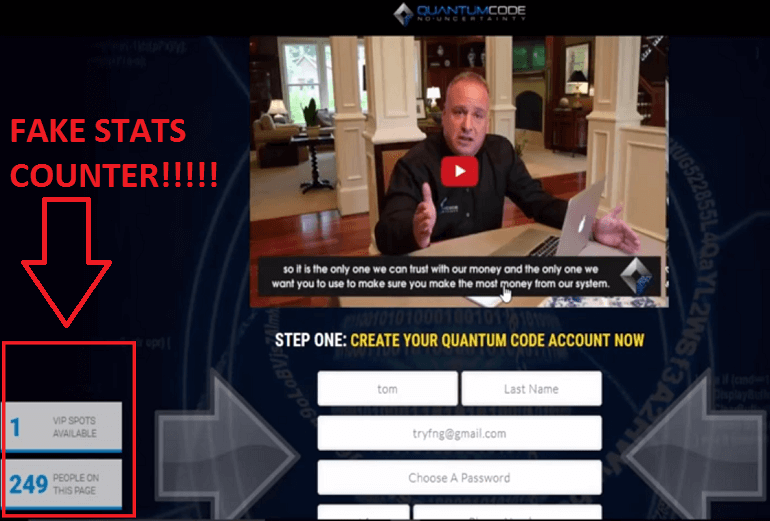 If you visit Quantum Code Software official website. At the left bottom side of the screen, you will see a widget showing you real-time stats about how many VIP SPOTS are available as well as the count of a total number of users on the website. Now if you watch that widget for few seconds you will analyze that the count falls down to one, and instantly jump ups to a higher number. If this count is trusted and real, then the VIP SPOTS which are still unoccupied by the users must have picked up by any of users. Also, there will be no additional spot which suddenly come into the website again.

According to Micheal, he has earned around One Billion Dollars using Quantum Code system in last 10 years. Now this is another fake statement by him, if you check the website domain registration details you will know that 12 June 2016 is the date on which the domain of the website was purchased. If this trading software website is created a few days ago, then from where he earned around One Billion in last 10 years?

This confirms that Quantum Code System is full of lies and is not real.

If you’re into the trading business from a long time, then you know very well that it is impossible to earn a profit of $10000 in just 24 hours. Even if you will use all of your initial deposit of 250$ in one trade, then even you can’t earn 10000$ in a single day. Moreover, We have already covered lots of genuine trading system in our previous articles and no one mentioned that you can earn this much profit in just one day. We also know that only Fake or Fraud trading system can guarantee you this much amount to convince novice traders. Now if you’re our regular reader, then you have definitely noticed that we always tell our readers that any trading software that assures you millions in a short interval of time are completed fabricated and we have proved this so many times in our previous reviews.

We have heard about NQS technology for the first time so decided to know more about it. But after checking about NQS on the internet we came to know that NQS technology didn’t exist in real life. So what this mean is that there is no such technology and Micheal using the word NQS just to convince users. 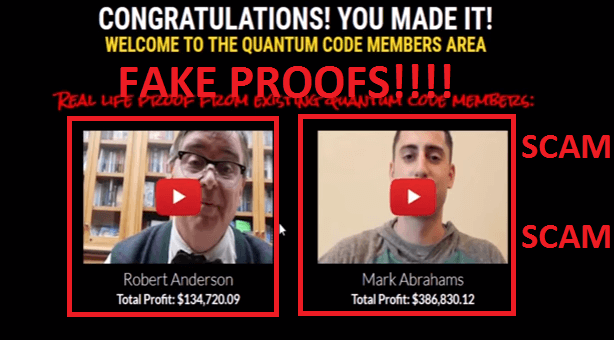 On the website, you will see faces of two people named as Robert and Mark. According to Micheal, these two people are real life proofs of Quantum Code. Frankly speaking, both these reviewers are fake and paid actors who provide fake testimonials just for money. We have seen them in so many SCAM trading systems.

Well guys, We have tried many binary options systems from last 1 year but after trying many softwares, we came to one conclusion that OptionRobot.com is undoubtedly the best trading robot which can make you can around 500$ per day with 85% Winning Rate. You can directly join this system by clicking on below banner. Check Option Robot Review.

After investigating a bit on Quantum Code software, there is no doubt that Quantum Code is a confirmed SCAM. So we’re not recommending this software to anyone. We have provided sufficient proofs to call Quantum Code a SCAM trading system. So we advise all of our readers to stay away from it. We guarantee you that what you will lost all of your money from this SCAM. Let us know in the comments what do you think about it.