Orion Code is a new binary options trading software that has been getting viral from past few days. Orion Code software is developed by Edward Robinson who claims to be the Wall Street Wizard made many bogus claims in the video which we will discuss later. Main motive of the scammers behind this system is to make any new or existing investors believe that the Orion Code can make them $100,000 in next 30 days.

So, is it possible to make $33000 in day with Orion Code? Of course not. In this Orion Code review today I am going to talk why you should stay away from this scam software. So if you are thinking to give this system a try, then we recommend all of our readers to read this review carefully.

Note for newbies: Orion Code is old dangerous scam “Quantum Code” which is just relaunched with different name and different actors. Each and every dialogue in the pitch video of both websites are exactly same. You can also check out our Quantum Code scam review & comments. 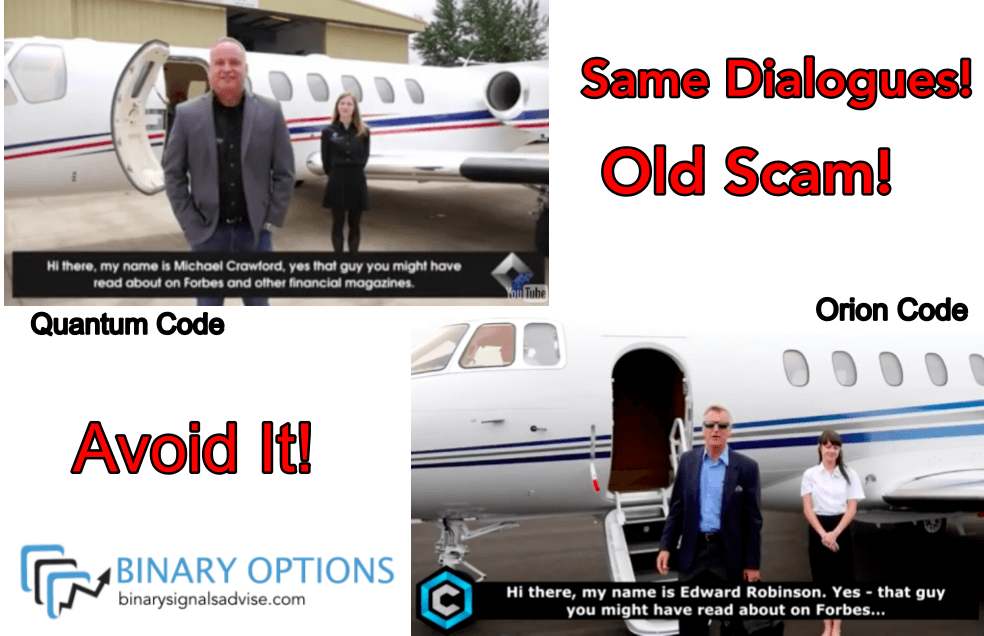 What Actually is Orion Code Software?

As I have already mentioned earlier, Orion Code is a Binary Options Trading software launched by Edward Robinson who is the Founder and CEO of Orion Code Company. There are alot of claims that Edward Robinson seem to make which starts of with making 100% guaranteed profits everyday FOREVER! And best part is that you can get access to this software for free. As Edward Robinson himself also claims that it doesn’t require any investment of any sort.

And with all these sweet talks, Orion Code is just trying to lure innocent people into their trap for investing. So if you are thinking about investing with Orion Code, then you should stop right now and rethink about your decision.

Orion Code is Confirmed Scam – Why? 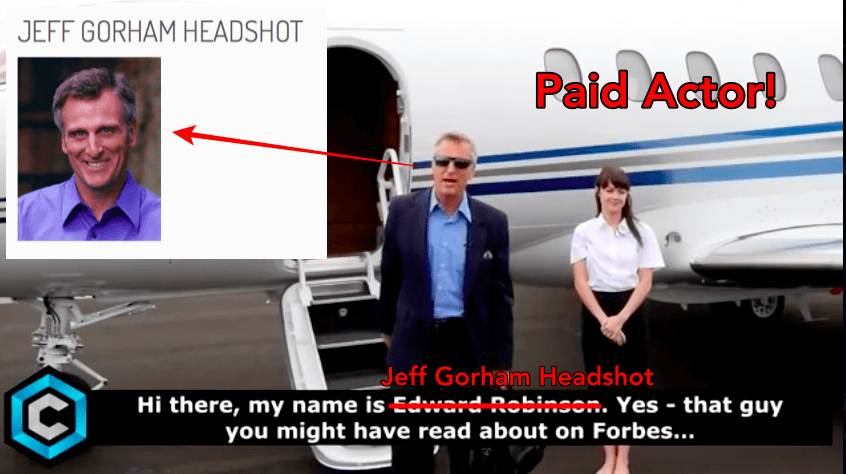 Edward Robinson who claims to be the creator and the developer of the Orion Code scam brings in the first reason of suspicion. As our research showed that the so claimed owner is no one but a fake actor. Yes, that right Edward Robinson is a paid actor who claims to own the Orion Code software which brings us to the question that whether the software really exists or what! Edward Robinson is a paid actor which has earlier worked into movies like Sandy Boulevard. You can also check his profile on Profile Threatre. So now are you still thinking about investing with this fraudster system just by believing that you can earn $3300 everyday? The owner himself is a fraudster who doesn’t have a really identity which really brings out the first red flag.

The video presentation itself is a fake one which has alot of fake claims that Orion Code software is faster then any other Binary Options Trading software out there. Edward Robinson goes on shouting about how this software has helped him and other make millions of dollars but never mentioned how the software really works! Well, this can be for 2 reason, one that the software doesn’t exist at all or two the software is just there to make people believe it can make money. Making profits through a software everyday forever is indeed a big claim even for a scam system like Orion Code.

After visiting Orion Code website once, any trader who has a little bit knowledge about these binary options scams systems can straight forward say that it is a scam. There are many fake widgets used like Few Spots available and membership will be closed in few minutes. Seriously? When Edward Robinson puts forward the claim that, Orion Code has changed over 200 people life by making them millionaire, you can be sure that those are simply some fake claims. If that would be the case then why there is no success story about any of those 200 millionaires? Moving on to the video presentation, Robinson also claims that their software has been presented at famous tech programs and financial market to make huge money but has been kept hidden.

Not just that, Edward Robinson goes on by showing that he has over $44 million in his own account, and says that he makes $10 million every year which is of course a fabricated fake account.

Even when the fake claimed software was making over $3300 per day, Edward Robinson still goes-on by claiming that they re still tweaking the software for more money! The software is claimed to be developed by Edward Robinson (who himself didn’t knew anything about trading as he says it proudly too) and his group of tech wizard and the software is based on NOS “Near Orion Speed” technology are simply alot of scam talks to make people into believing that the Orion Code Trading system works. 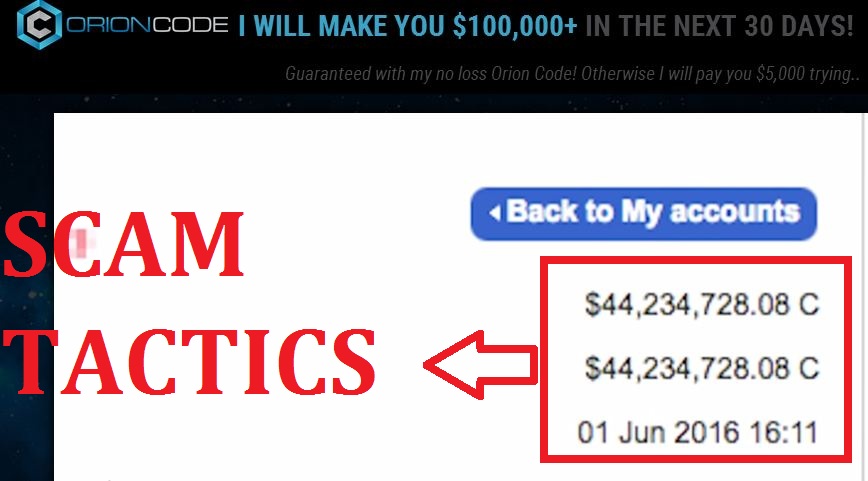 The performance of the Orion Code is pretty much questionable as Edward Robinson himself says that the software has nothing to do with Forex or Trading or Binary Options, it is all about TECHNOLOGY as Orion Code system is claimed faster, which is really questionable.

Is Option Robot not available in your country? Then you should try BinBot Pro app for trading.

As I have already been saying from before that, Orion code is definitely a scam and I recommend you to NOT even visit their page, as all you will ever gain from this system is LOSS. And if you believe that it is possible to make $3300 a day and $100,000 a month when I am sad to break it to you that such system doesn’t exist unless it is a scam system! To which I would say you to stay way from it. So making $3300 in day with Orion Code software isn’t just hard but impossible, as there are just a handful of LEGIT binary options trading software that can hardly make over $1000 in day.

And so coming to a conclusion, I can say that Orion Code is a scam which has been proved following all the misleading information I collected from their site. I would suggest you to stay away from this scam as it will only rob you of your hard earned money. I hope this Orion Code scam review helped you in taking right decision.