Multiplexer System is a just a way of scamming people by presenting it as a binary options trading software in-front of people. Multiplexer System may appear to be reliable and trustworthy but this is just a ploy for trapping you. Truly speaking, Multiplexer is good for nothing software, which is introduced to us by Richard Ewing and it promises consistent profit $20,000 per day. Unfortunately, many people have been investing lots of money in this software and have lost their hard earned money miserably. 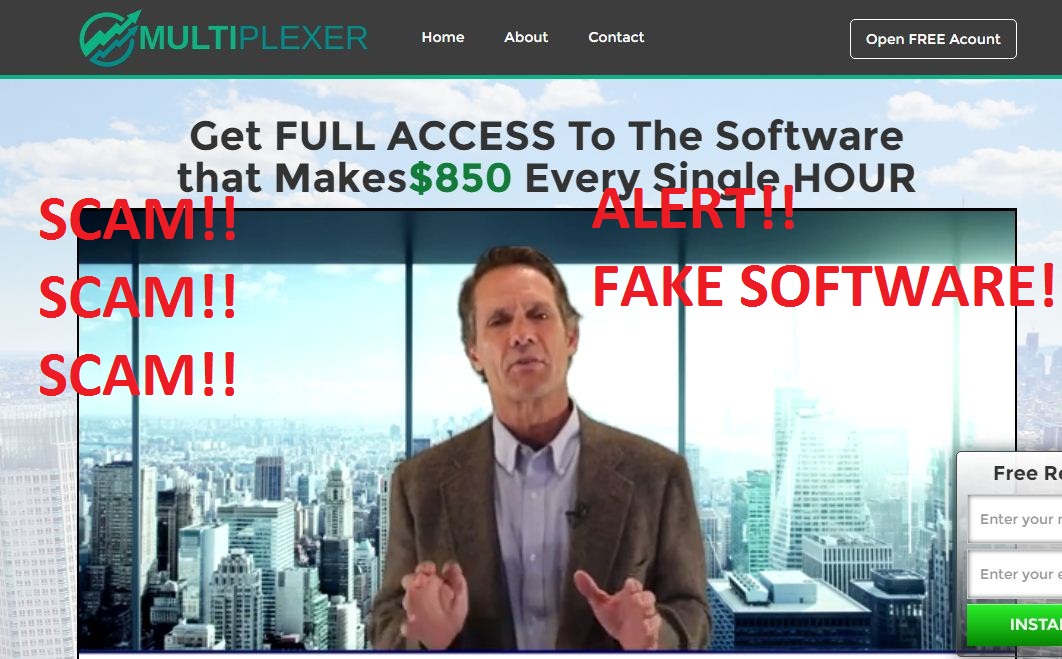 So, for this reason, I have been looking closely at this software and the results were shocking. And today in this Multiplexer System Review, I will be revealing all these details with you. So if you are planning to invest your money in Multiplexer software then go through this article before doing so.

As I have already told you that Multiplexer System is an automated binary options trading software. Richard Ewing is the developer and the CEO of this bogus System. This person promises that you will be making $20,000 per day for the rest of your life. He made many bogus claims that he has changed the lives of 43 peoples within a span of 6 months and all of these 43 people are millionaires now & now he is providing this software to just 20 people.

Why Multiplexer System is Not Safe?

There are many reasons that indicate that this Multiplexer System is a not safe to try. Below, I have listed some of them. So spare some minutes and read them carefully.

No Explanation about the Algorithm

No explanation about the software is mentioned in the video. If you carefully listen to what the presenter says, then you will notice that he keeps on repeating the same thing over and over again but in a different tone. So how can you just invest in a software that doesn’t provide any proper explanation about it’s algorithm?

The presenter in the video claims that he has made 43 people Millionaires within a span of 6 months. But after looking closely at the website of Multiplexer System (multiplexersystem.co) I have found out that the domain was registered on 6 October 2016. Then how they made those 43 people millionaires? This only proves that the owner of the software is lying.

The video that has been provided on the website of Multiplexer System doesn’t contain anything. The only thing present in the video is the owner who feeds you lots of crap about how successful this software is. The video also contains some crap about fancy places and fake people who were undoubtedly hired for acting here. All those things are just presented in video to lure newbie traders to fund their account with initial deposit.

Richard Ewing who claims to be the owner of the Multiplexer System is most likely a fake person. He seems to be a paid actor who has been paid by the scammers to lie in front of camera. In the video, the owner tells his story that how he has worked at many places and later he met a successful Wall Street Trader called Mr. Ross McGlinchey and lots of other stuff. Everything that he said is nothing more than lies. We tried to find out about Mr. Richard, but we were not able to extract single information about him or his system from any social networking site, wall street magazines etc.

There is a lot of information present on the Multiplexer website that actually says nothing. In the FAQ section, the answer to the first question is quite unreliable. At the end of the answer, it is written that “support is offered by us on call 24/7”. But one thing is missing and that is there is no phone number, if the users need to call also where would they call? The last question in the FAQ also has unreliable and fake information. Moreover, we tried to contact them via e-mail too but that does not seem to be working too.

There are no testimonials of users present on the site. The site actually says nothing about the so called 43 millionaires. The only thing that we get to know about these people is at the beginning of the video. In the middle of the video, the presenter shows us a list of people who have earned big money with the help of the software. But it can be easily determined that these lists are fabricated.

All of the above things indicate that this software is totally unreliable and cannot be trusted. So it can be concluded that this Multiplexer System is just another scam. So, we recommend all of our readers to avoid this system and keep their money safe. You may think that they are reliable after listening to the presenter’s promises, but they are just “wolves in sheep’s clothing”. If you will do a little bit research about most of the binary options scams, then you will get to know that Multiplexer System is no different from such scam systems. Don’t forget to subscribe to our e-mail notifications to get latest updates about such scam systems. I hope this Multiplexer System review helped you in taking right decision.