Trading with the Immediate Edge robot is a highway to heart-wrenching losses. All those promises of quick money and a high win rate are all lies and illusions. You’re not making a cent out of the likes of Immediate Edge. Instead, they’re after stealing from you. It’s a jungle where the predators in the name of Edwin James try to eat up the preys-crypto traders. If you don’t outsmart them, your money is going into their dirty bank accounts.

Last year, a friend lost thousands of dollars and landed in the hospital. He invested in a get-rich-quick sham and lost all his life savings. His blood pressure rose to the extent of paralysis. It wasn’t funny at all. I can’t ever forget the pounding of my heart when I heard he collapsed. All his hopes of a luxurious and stress-free retirement went with the wind. Thank God he didn’t commit suicide. He held himself because he was strong-willed. What if he was weak at heart?

No one should ever experience such a loss, and you shouldn’t either. If you’re wondering about Immediate Edge right now, stop right there. The crappy robot is an illusion, and the owner is a cheat. The best thing to do right now is to block the site. If anyone tries to convince you, accuse him/her of being a scammer and threaten to call the police.

Immediate Edge is the scariest crypto trading thrashy robot online. Don’t give ear to the rubbish you see on their platform. The news, reviews, and testimonials are just too obvious. We’ve investigated the system and discovered dirty little things they’re trying to pull with it. They’re in bed with a nasty unlicensed broker called Infinitrade, who is scamming and deceiving people. Their relationship stems from mutual gains at your expense. Yes! Once you lose money, they’ll smile and share your losses as profits. Can you imagine that your tears of pain are someone’s tears of joy?

It’s very annoying, really, and this Immediate Edge review aims at exposing them and protecting our readers from a heart attack.

We’ve seen lots of scam software, but Immediate Edge is on a whole new level. Many red flags jumped at us when we investigated the system. As you continue in this Immediate Edge review, thank your stars that you’re not a careless investor.

One of the jokes I discovered is the message that this robot is free to use. The next is that the system is safe and has no risk. Then the funniest is telling us that Immediate Edge is a brainchild of intelligent and prominent analysts and crypto traders, a wealth bonanza that offers an algorithm that always wins. Yeah right! Jokes all over!

Well, the jokes continue. Check these out!

I checked the website out and guess what I saw? A trader can make $950 to $2200 every day. According to the thrashy designer, the platform is the most intelligent cryptocurrency trading software all over the world. Moreover, they stated clearly that the smart robot only executes trades when it’s sure of a win. No wonder it supposedly achieves a 98% accuracy rate. Wow! This is one of the lines that convinces a newbie to withdraw his life savings. Unfortunately, those results are lies and more lies. You can check out the landing page and see the figures people supposedly made with the software.

Fake results are exactly what we see in every scam software. Immediate Edge is not the only thief doing it. I always believe that these crappy systems are coming out from one pot. There’re miscreants somewhere who has decided to make money defrauding people. Their strategy is to be launching the platforms in many names for quick money.

But the problem is that they’re the ones getting rich quick and not you. If they launch 50 robots and each one deceives 50 unsuspecting traders who invest with a minimum of $250, do you know how much they’ve made? They made $625,000 without lifting a finger in a very short time.  I used the lowest number to check this. But we’re talking about the web where everybody visits. So, imagine how much they’ll make when 100 to 500 traders invest from $250 and above.

If you believe any of the lies, you’re in for a big fall. So, don’t try it. 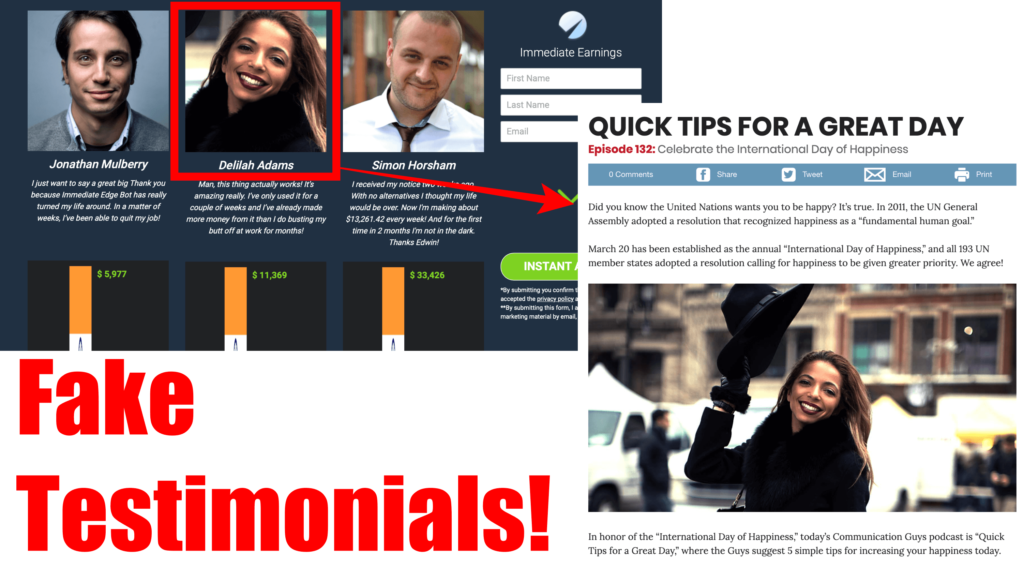 There are many liars on the website showing the amount of money they’ve made on the system. Don’t mind them at all because they’re not real people. Anybody can fabricate such names, get some stock photos, and quote a figure to convince you. If those heads made those amounts from Immediate Edge, then I ate with Bill Gates last Sunday. They’re fibbing, and if you believe them, you’re in for a shock.

Also, beware of affiliate marketers who write reviews on different websites. Don’t blame them a lot since they want to make money too. But, it’s still too bad for the readers who invest in a system designed to steal from them. So, as you search the internet, investigate and don’t rely on others. All the Immediate Edge reviews are lies. 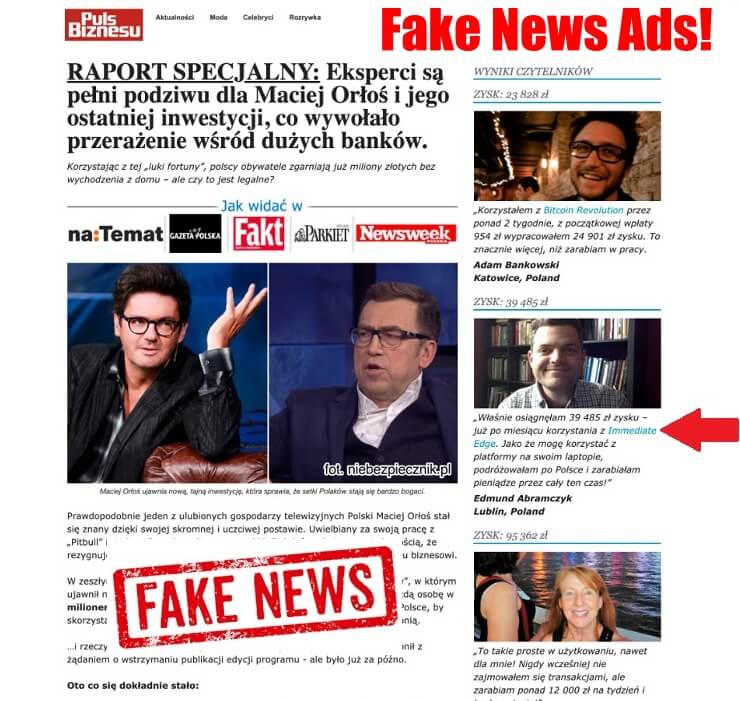 There’s nothing real about Immediate Edge, and that’s a big shame. Over the internet, you’ll see many fake news ads lying about Immediate Edge. For instance, some heartless Poland advertisers launched false campaigns about this crappy robot. They used pictures of celebrities on the ads to deceive traders into believing that the system is profitable.

It seems that the new normal is to use unsuspecting celebrities to promote thrash. It’s annoying, but we encourage the community to be smarter than the fools. Don’t swallow the lies but investigate on your own. That you saw the faces of Elon Musk, Richard Branson, Peter Lim, or Celeste Barber, doesn’t make them crypto traders. These big guys have sources of income, which has nothing to do with trading on Immediate Edge.

So, why allow the thieves to fool you? This crappy robot is not your ticket to wealth. It hasn’t made the owners rich or else, they won’t have your time.

We’ve seen many brokers attached to scammers, but Infinitrade is the worst of them all. Not only is he lying to make money, but he also is not certified nor licensed in any State. Apart from all these, the broker also attempted to redirect some users to another crappy software. Some traders in the community who called confirmed these tactics.

Instead of encouraging you to invest in the Immediate Edge platform, he will ask you to invest in another crypto trading robot. When the news got to us, we discovered that they are not even transparent with one another. The broker wants to cheat his dirty cohorts out of their share when someone invests.

So, if you’re sending money to a broker without license, certificate, or character, please say goodbye.

Sometimes when a new crypto trading robot hits the market, many people rush to try it out. At that point, no matter how hard we try to draw them back, it’s always futile. But with time, the truth about the scam will be exposed, and the complaints will fly in. Such is the case with Immediate Edge.

Many people rushed in where angels feared to tread. It wasn’t long before we’re flooded with regret stories. Yes, you’ll never get to hear a success story. Almost everyone who invested lost their money.

So, if there is no good story to tell, why will anybody still try?

We got a name, and that’s it. But who is Edwin James? What’s his story, and who knows him? All the answers to these questions are not anywhere. This is just like scammers to hide behind a fake name and fake address to deceive people.

Whoever it is that created Immediate Edge, he is not Edwin James. If we’re wrong, let him declare himself instead of lying. As someone who has the solutions to people’s financial problems, there’s no transparency from him. Well, we don’t ever believe them and you shouldn’t either.

Immediate Edge .seem to be a standalone crypto software. We took our time to investigate the lies and discovered they’re not working with any major exchange. According to their pitch, they’re working with Bittrex, Coinbase, Poloniex, Binance, Kraken, etc. We checked, but these exchanges haven’t had any dealings with them at all.

Now it’s clear that the crooks mentioned it to deceive traders. They were using the other exchanges to promote their crap. The truth is that they’re thieves, and those reputable exchanges won’t have any connection to them. 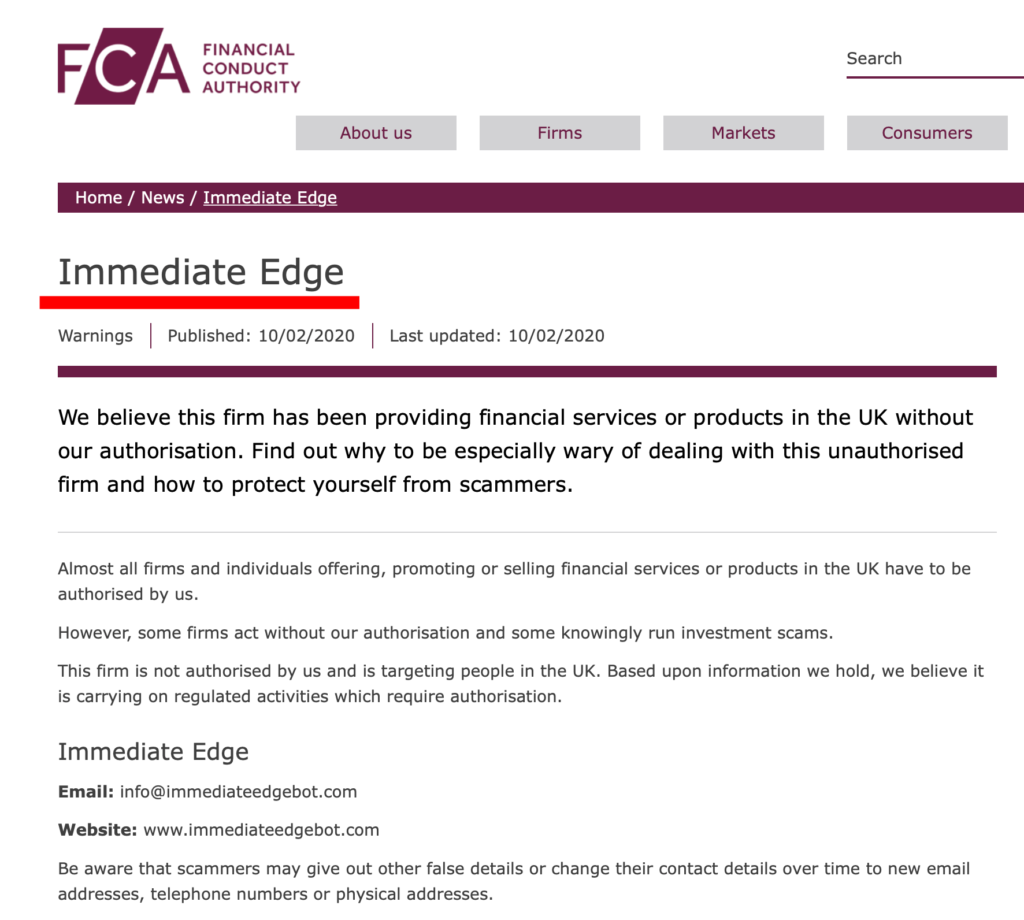 Here is the straw that broke the Carmel back. These thieves have been marked and blacklisted by the U.K Financial Conduct Authority. They’ve made the list of scam software operating illegally in the United Kingdom. So, tell me why anyone will be so careless as to invest in Immediate Edge?

No matter what anybody says, or the news and testimonials you see, this Immediate Edge review should be enough to protect you. It’s a dumb robot that scammers launched to steal money online. Everything about the software is fake, and there are no good results from it to date. So the best thing to do is run!