You’re reading this Hoffman Stein review because you want to know whether Hoffman Stein is a Genuine binary Options or a SCAM just like most of the trading system available on the internet. Right?

Hoffman Stein application joined the other binary options a few months ago and a large number of users have already invested in it, while other preparing themselves to try their luck but want to know our opinion before taking any step. Friends, we have completely analyzed this trading software and found that it is completely fabricated. So we recommend you to read our review about Hoffman Stein application to know why it is not a genuine binary options system. 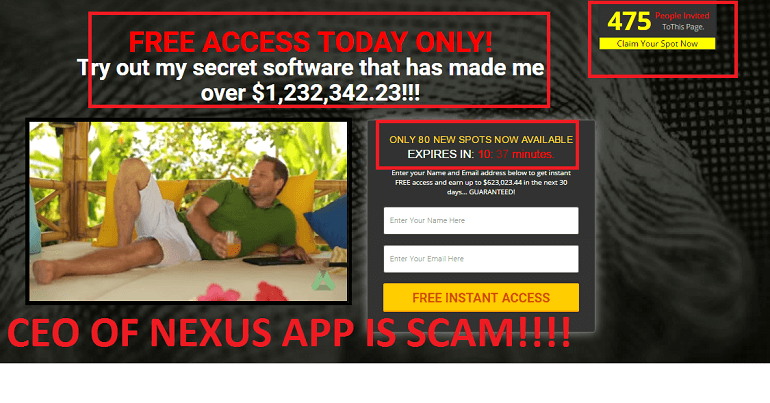 The presentation which was given by Anthony Henderson in the pitch video already impressed lots of novice trader. Even users have started dreaming about luxurious life which Anthony promised in the video. Sorry for breaking your hearts friends, but Hoffman Stein is not the trading system you’re looking for.

We are very sure about it, as we have gathered lots of proofs which are sufficient to call Hoffman Stein a SCAM. In upcoming paragraphs, you will read about the reasons why we are calling Hoffman Stein a SCAM, but first, we want you to read more about Hoffman Stein trading and find out some basic things like who created it, and what special feature this trading software is providing. Who created this fake app.

What is Nexus or Hoffman Stein Software?

According to Anthony, Nexus application is not difficult to use as it is 100 % automated. Also, there is no requirement that only a computer geeks can earn a profit using this application. It is  completely cloud based and you do not need to download and install any software on your PC or laptop, even you can use this trading app right from your smartphone. Hoffman Stein trading software interface is very easy to use and in just a few seconds you can fully activate the application to start trading.

Dr. Henderson mentioned that he is very sure about his trading application and if you start using it, then you will definitely add some great profit in your bank account. The reason why he is so confident is beta testers who joined his first batch and earned a great amount of profit using the Hoffman Stein app. His previous batch has users all across the globe and now he want to give the same opportunity to new users.

If you really believe us, then please stay away from Dr. Henderson’s trading application, he is telling all these things just to get the attraction of novice users who want to become rich overnight. We are sure that all the promises Anthony making is fake and no one will earn a single dollar using it.

So without wasting a single second why don’t you read about the proofs or the reasons on the basis of which we are calling Hoffman Stein SCAM.

The CEO of Hoffman Stein App is Fake

After reading this proofs it is confirmed that Nexus app or Hoffman Stein software is SCAM. So stay away from it.

If you visit the official website of Hoffman Stein application you will see a popup telling you that they want to give you 100% free access to the software right now. If you register for application in provided time. The system will give you 5 minutes to think whether you want free access or not. 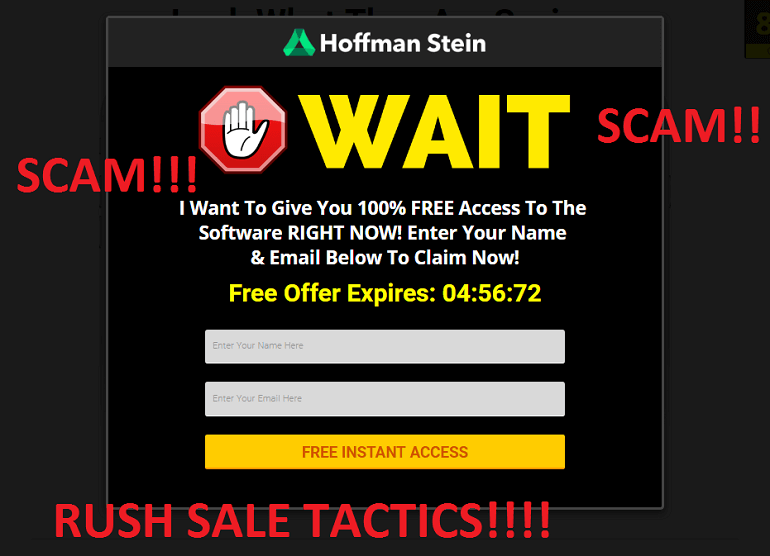 Also, if you close the popup another registration form with real time stats will be visible on the website showing you how many spots are available for users which slightly decrease with time.

We have filled both the registration forms and found that these two forms are part of rush sale tactics and they added these forms into the site so that they can force more users to create an account for this fake trading software. But the truth is that these spots will never fill up even if you visit the website after 10 days.

So it is confirmed that like most of the fake trading app, Anthony is using misleading techniques to SCAM users.

If you have watched the complete pitch video, then you must have listened to the statement made by Mr. Henderson that lots of users have earned great amount using Nexus app in last 8 years. While doing a research about this application we noticed that there is something which he is hiding from us because from the WHOIS information of the Hoffman Stein software website we come to know the domain was registered on 10 February 2016.

So it is confirmed that is FAKE

In binary options, it is impossible to earn $6000 in just 10 minutes without paying a single dollar. Even genuine trading software exist on the internet who guarantee this much amount in a short interval of time. Now tell us one thing why someone would like to help us in earning this much amount without any profit? He is telling a lie and only giving this offer just to fool people.

100% winning rate in binary options is impossible and only SCAM binary options provide you this much winning rate. So after reading this on the official website we have no doubt in our mind that Nexus app is a SCAM. And you must start looking for another trading app instead of depending on it.

We have given you sufficient proofs which confirm that Hoffman Stein or Nexus app is a SCAM. So we recommend all our readers to stop checking this fake trading application. The whole system is created just to steal the money from innocent users. Instead invest into any legit binary options signal which you can find from our Recommended Signals page.

Do let us know what you think about Hoffman Stein.