Whenever there is a talk about binary trading options industry, the first thing in our mind is about instant profits. It is one kind of industry where you enter with no jumps and where there is a scope of huge profits. So it seems money makes very easy but small mistakes can lead to heavy losses. There are many binary trading systems available on the internet and Drexel code is one of them which was founded on 4th March 2016 by Cory Drexel.

Now if you’re reading this review that means you’re interested in investing in Cory Drexel’s auto trading system. But before taking any steps which spend few minutes reading this review. As in this review, we’re going to discuss some of the fact which might force you to change your decision. 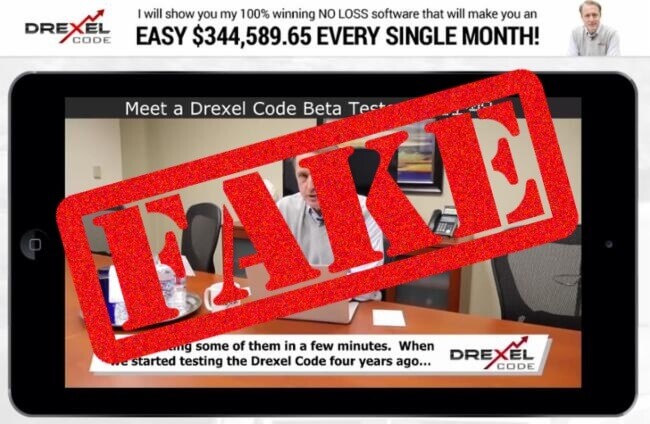 We have done a deep research on Drexel Code binary options signals system and able to gather some negative proofs about this system. So without further a do, why don’t you start reading our review on Drexel Code System. Recently, we have also exposed Zulander Hack Scam & My First Online Payday scam.

What is Drexel Code System?

Drexel code is developed by Cory Drexel, is basically a binary options signals system that is designed to their users to win and to predict the binary options trends. They guarantee you to have less risk in comparison to other traditional opportunities. According to the founder, the Drexel code works on the real-time analysis so that traders gets the huge return on their investment, also provide the status to the traders so that traders can know what should be the next big step. A hundred percent profit can never be achieved, so the founder of this system comes up with the new idea is not claiming 100 % result. But with huge focused on beta testing results, the founders believed that to deliver 90 % accurate output in a regular way. Now the question arise will that system really work and their traders get the output as they want to achieve. Is this system fake or real? The answer is below.

How does Drexel Code work?

Cory Drexel and their team developed some mathematical algorithm which keeps an eye on the movement of assets in the market.  Starting with the prediction of markets initial movement and based on this its presents some trends and actions, which sends back the live signals to the user who works on. Basically, these trends and actions tell the trader which stock or asset returns a huge profit. All the decision is only made by this system without any human intervention. The signals that system provides traders can start investing with no or little background knowledge.

With the following below steps, you can start trading in few minutes, according to the founder.

Now the thing is why some company sells their product free along with the joining reward as well. We help you to find the reality of this software.

After getting the deep information about this software we find out that this is just a big and dangerous SCAM nothing else. Let’s find out the proof of this nasty SCAM.

By keeping all the fact which we discussed above we figured and that Drexel Code trading system is nothing but a smart scam with nasty secrets.

Making money is not a big thing but how to make money without any harm is a big thing. So avoid these type of binary options signals which causes only loss of your money and time. Before going to any such app make sure you are confident, read out user’s feedback.

The Drexel code and Cory Drexel is just a fake CEO of the Fake company who want to loot your hard earned money. So it’s better to look other alternatives rather than investing in this fake trading system. So we recommend to try other system like Virtnext app and don’t try to think to invest your money in such fake apps.

If anyone out there already tried Drexel Code, we would love to hear your experience while using this trading system.