Click Money System is a new scam that has been claiming to help the traders in making a huge amount of money on daily basis. With claims so big, it wasn’t long until it caught a lot of attention from all around. Unfortunately, for the user, you will need to have a click money system invitation to join up as there were very limited amount of space. The claimed owners says that they have made over $16 Million in just 12 months, which sounds really insane. So, I took the courtesy of looking into the software and its authenticity. 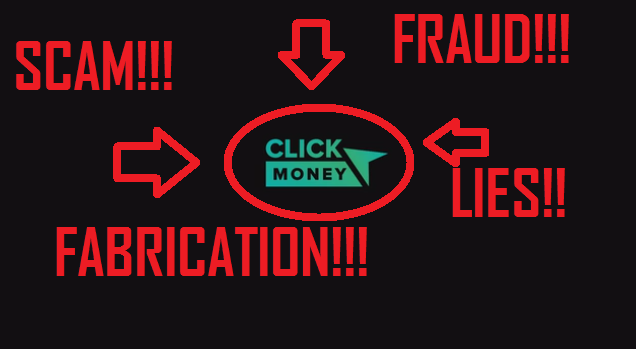 All About Click Money System That You Need to Know!

Developed and founded by Julia & Harold who are from England, Click Money System has been claimed to make a huge amount of money in a very short period of time. The initial investment which requires a minimum of $250 is doubled into your account as soon as you invest. So, whatever amount you will be investing, it will be doubled and the profits will rise quickly with bigger investments.

Julia & Harold also claims that they started the account of a team of 4 people a month ago and they are already millionaires now. The highest amount you could see that have compounded after an investment is from $250 to $3 million in just a 1 year.

The proud founders of Click money system scam, Julia & Harold claims to be from a really poor family. Harold being an engineer and having a minor in finance, whereas Julia has graduated with major in Economics. And in the end, they both worked together to build up the software and the company “Click Money System”. 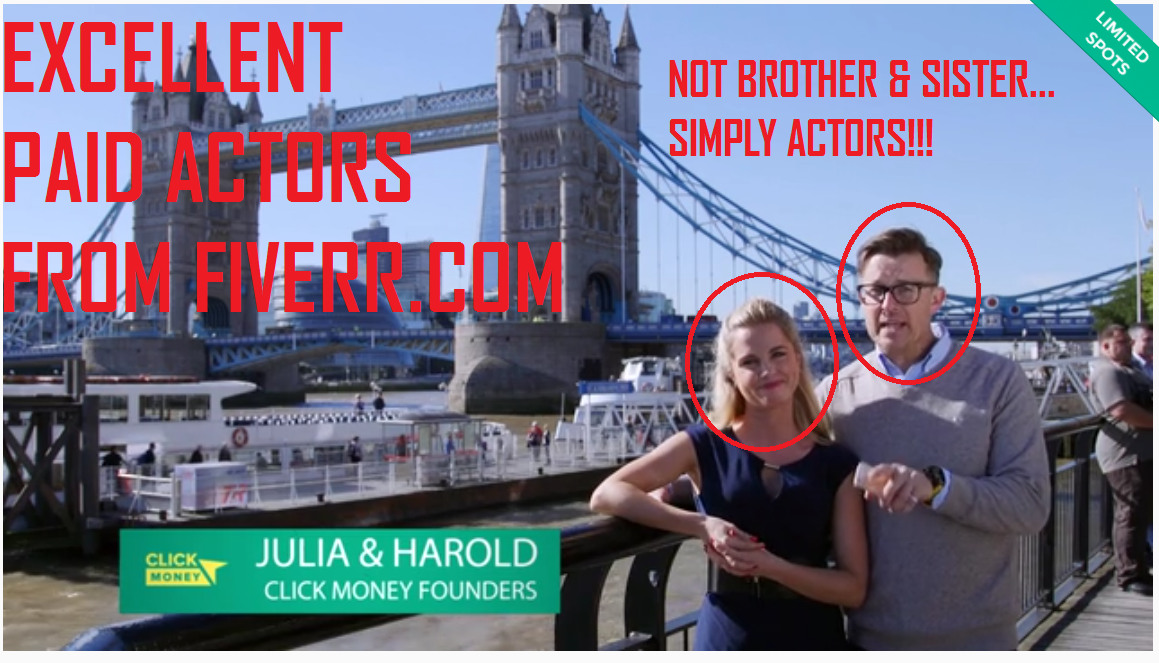 Well, this could have been a great story if they weren’t some random actors. Yes that’s right, they are indeed the highest paid actors from Fiverr.com who have excellent taste in acting. But for the fact that, though my research I tracked them down and found out that they are simply paid actors, this brings us to the conclusion that, all they said are scripted and can’t be trusted.

Let’s talk about the headquarter of Click Money System first, it clearly was a huge setup to bring in the motive of showing how rich you can get. which wasn’t true of course as we have already witnessed the same house in yet another scam! And leaving that apart, when it comes to the software, it is clear that the software is not trusted worthy.

Well, in the whole official video (3rd part of a video, which is played after you sign up for their system), it was never be made clear on how the software actually works. This brings in the question whether the software really works or not. There is no binary options trading software that can make such huge amount of profits in such a short time. And making over $20,000 in a day is really impossible if you ask me. 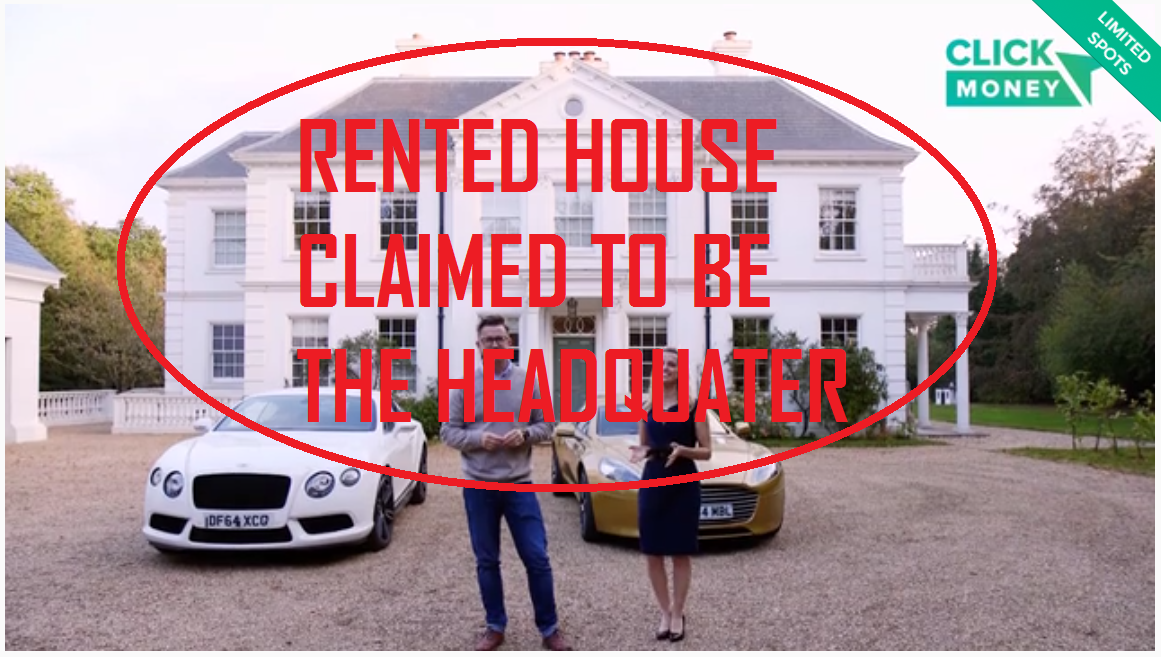 As from my research, it was easy to find that, such a well performing claimed software never came to the spotlight even on news or social media. And not even through the Binary Options Trading market which proved that the software doesn’t even exist.

The click money system has been claimed to work without any risk by returning your investment in a huge amount of profits. Also as the spots were limited, they sent out only a few invitation for those who can register with the software. And this is where things get a little fishy. 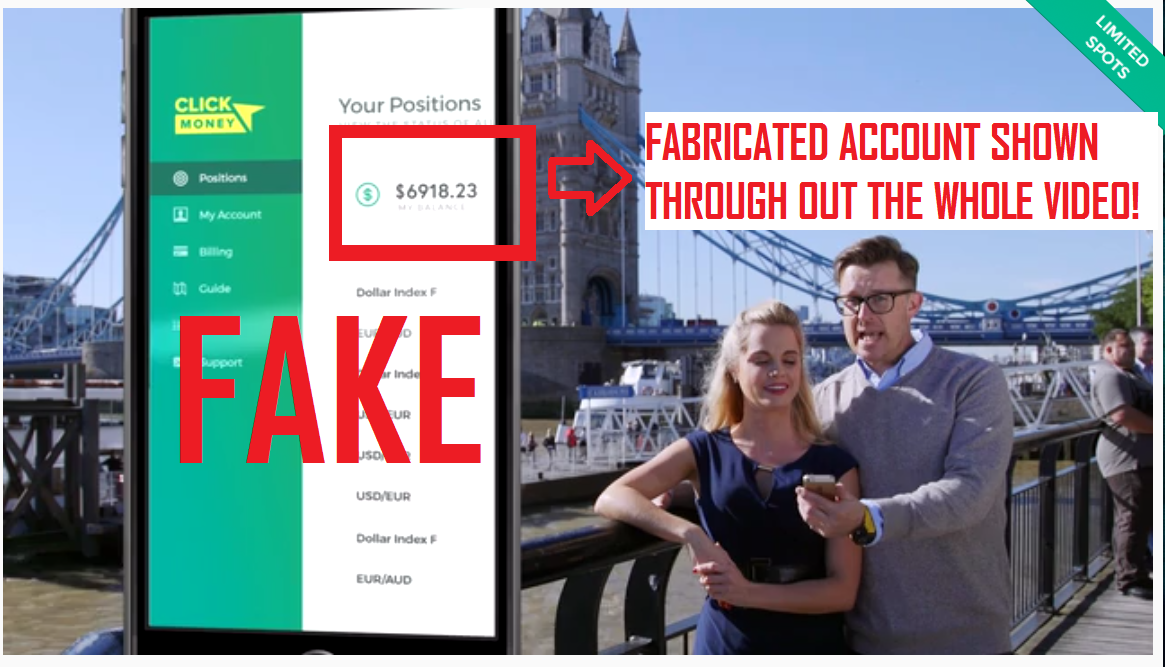 How did I get access into registering with the software? Through an invitation? Obviously NO! I simply went ahead and visited their site, the so claimed only invitation access is simply bogus. not just that, after you visit the site, you will have to register in quick as there is a timer that could ban your offer of signing up after the time runs out. Really? Not at all, because the timer never runs out. This trick is to make the visitor invest with the software as fast as possible, so they can’t look into the scam setup laid out by Click Money System scam.

The clients who claim to make millions with Click Money System are not real at all. They are hired actors from Fivver.com who are paid to join up in the video to make fool out of you. They act like they are the four first lucky clients who made over a Million in just a year.

But through the research, it was found that they are simply actors trying to make you believe all their lies and lure you into investing with Click Money system.