Did you hear about BTC Prestige and now wondering if you will give them a trial, my advice is no! Stay away from it. Why?  You say? The app is a complete scam, and everything they are saying or promising is a total lie. Who told you that you could make millions without working for it? If you are an online trader, you are a target for many scammers who come up with terrible lies to defraud you of your hard-earned money.

My candid advice all the time is that before you get excited about any stupid and useless app like BTC Prestige, carry out a thorough investigation or take your time to read our reviews. Due to the continuous influx of these scam software into the online trading marketplace, many people are finding it difficult to differentiate the real ones from the illegal and thievery apps. The good news is that I am here to help you always so that you will not take a wrong turn in your earnest desire to make money online.

When BTC Prestige hit the Internet on March 13th this year, 2018, I looked at them critically and they didn’t take long to expose themselves. I took my time always to investigate and discovered terrible lies. Read this BTC Prestige review and discover the many lies and deceit they used against innocent traders.

BTC Prestige is a scam software which I don’t even know the developers behind it. When you watch the sales video, you will get an interesting story about the explosion that is going to happen in the prices of Bitcoin very soon because of the law which Russia and China are going to pass. In fact, the voice of the nameless scammer continues to say that given the population of these two countries, up to 1.5 billion people are going to invest in the digital currency which will make the price to skyrocket.

From their claim of what some nameless experts say about Bitcoin, the price will go as high as 1billion dollars very soon immediately Japan and Russia legalize it. The effect also will increase the price of other digital currencies in the industry, and as such, you must start the game and gather as many Bitcoins as you can get.

Now, to get your game going, the thieves behind the BTC Prestige scam want you to use their platform and trade on Bitcoin. According to their lies, you don’t have to be an expert in trading or do you need to know anything about cryptocurrency before you can register and make money. All you need to do is deposit $250, and you are ready to go. As you follow the trading signals which their system will generate for you, you will make ten times of your initial deposit.

Before I go ahead to examine these thieves and their lies one after the other, I want to assure you that everything they said in that short video presentation is a complete lie. Their information is not accurate, and there are no users who have something good to say about them. So, let’s look at BTC Prestige closely.

The answer to that question is no one. I couldn’t get a name, accompany name or even a physical address of the man behind the BTC Prestige software that will multiply your money in Bitcoin without stress. Since I have been reviewing many trading apps and this one is exceptionally deceptive. They didn’t provide any name but what I heard was that the voice said he has 30+ years of experience in the industry.  Will you believe such a cock and bull story when we don’t know who they are or the location of their offices?

Will you deposit $250 or more to a nameless and faceless scammer in the name of making a huge amount of profits? That will surely be a bad investment if you ask me. 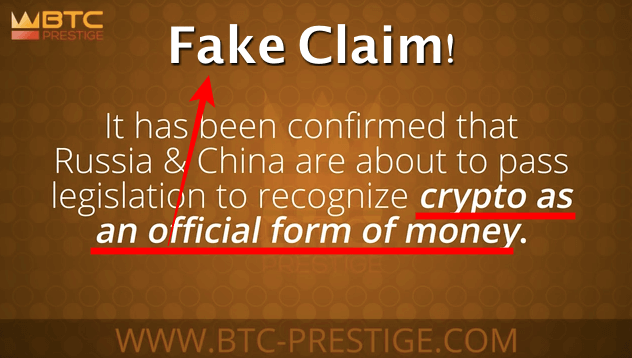 When I started listening to the video presentation, I heard that Russia and China have not been using Bitcoin because of the ban that was placed on them. According to the voice, the residents could not use this digital currency because it was not accepted. According to their lies, the recent information going around is that very soon, Russia & China will make bitcoin as their official currency, and over 1.5 billion residents of Russia and China will troop into the market in search of Bitcoin. Even without saying anything, don’t you know that it is a lie? That’s just a fake claim to scam novice investors. 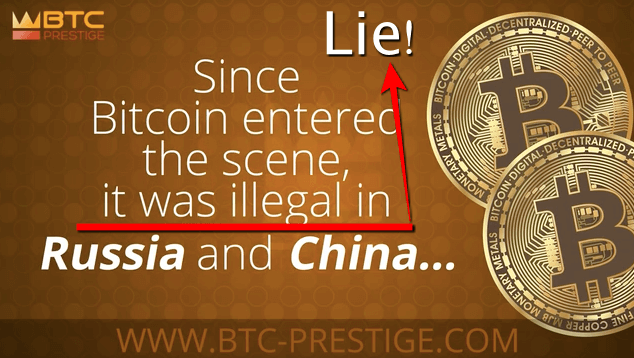 The first thing I want to point out here is that there is no ban whatsoever on Bitcoin in China or Russia. From the beginning when the digital currency was released, these two countries have been making use of the coin and even now, they are still using it. So tell me where they got such a terrible lie that users from the two countries are going to enter the market suddenly to cause a boom in Bitcoin Price.

Are they even aware that the biggest miners of Bitcoin are from China? Since they are ignorant of the whole cryptocurrency world, there is no way they can give accurate information about it. What you should not forget is that the two countries they based their lie on are already mining and using Bitcoin. There is not going to be a sudden spike in bitcoin price, and there is no profit for you if you trade based on their rubbish. Stay away from an app that relies on a lie.

I watched the video and also witnessed their attempt at falsifying evidence. They showed a fake result of how their trading signal predicted a surge in the price of Bitcoin to $11,000. I don’t know where they are manufacturing such lies. The truth is that since March, Bitcoin has been tethering on the $10,000 level and has not reached the amount they are quoting.

Sometimes I am happy that reviewers like me exist because I don’t know what these scammers would have done with people. After showing such fake and useless result, a novice trader may jump up with excitement for discovering such a shortcut to amassing great wealth. What if they use all their savings for BTC Prestige trading signals? That might lead to suicide indeed! Heartless bunch of fool!

Let me be clear on something here. If the automated software is the real deal, they will try to explain how they make use of some technical indicators to predict the movement of trading instruments. They will tell you how the app generates the trading signals they want you to follow so that you will be convinced to trust it.

In the case of BTC Prestige, all you get is the encouragement to deposit $250 into the account of a dubious broker. This move convinced me that they are the real get-rich-quick scam available today.

If you must invest or trade online, you need the backings of the law to protect your money. BTC Prestige is using an offshore broker that is not regulated, and they want you to trust them? Don’t ever deal with a broker that has no license of operation like the one this app is using.

Immediately you deposit your money, it will go directly to the coffers of X markets, an unregulated broker who has no issue with swallowing your deposit. Don’t mind the promoters of this dubious app, they are getting their cuts from the broker so why won’t they say anything to make money.

You have seen it all, right? This useless app is only out to steal from you and nothing more. It is a total cooked up by hungry thieves online. Their strategy of advertising is unique indeed, but we have confirmed it is all a lie.

I don’t see why you will consider trading on such a platform that is all lies. Keep your money away from them and save yourself from the trouble. BTC Prestige is automated trading rubbish, avoid it!