If you’ve not heard about the dirtiest scam on the internet now, read this Bitcoin Revolution review. This is the stupidest and most desperate attempt I’ve ever seen in the journey of online business.  Recently, my partner told me that the increasing acceptance and adoption of Bitcoin would turn greedy folks to online thieves. I doubted him then, but with what we’ve confirmed about this dirty scam, I think he is right.

Bitcoin Revolution is one of those get-rich-quick shams that springs up to confuse people. Sure it looks legit, but it’s terrible dirt. Online miscreants are preying on newbies in the crypto sphere to amass wealth fraudulently. This recent scam, called the Bitcoin Revolution, makes me want to puke whenever I watch the lies and deceit. The lengths they go to dupe innocent people sometimes are terrible. But this time around, the law will bring them to book.

So, if you’re planning to try the app and make money, please run for your dear money. There’s no cent available in the scam. You’re going to lose your investment without making a cent. To say that Bitcoin Revolution stinks of fraud is an understatement. Everything about this investment sham is a lie. They concocted a fake emotional story and even involved respected celebrities in selling their dirty platform.

Read on and understand why you must stay away from Bitcoin Revolution Scam! 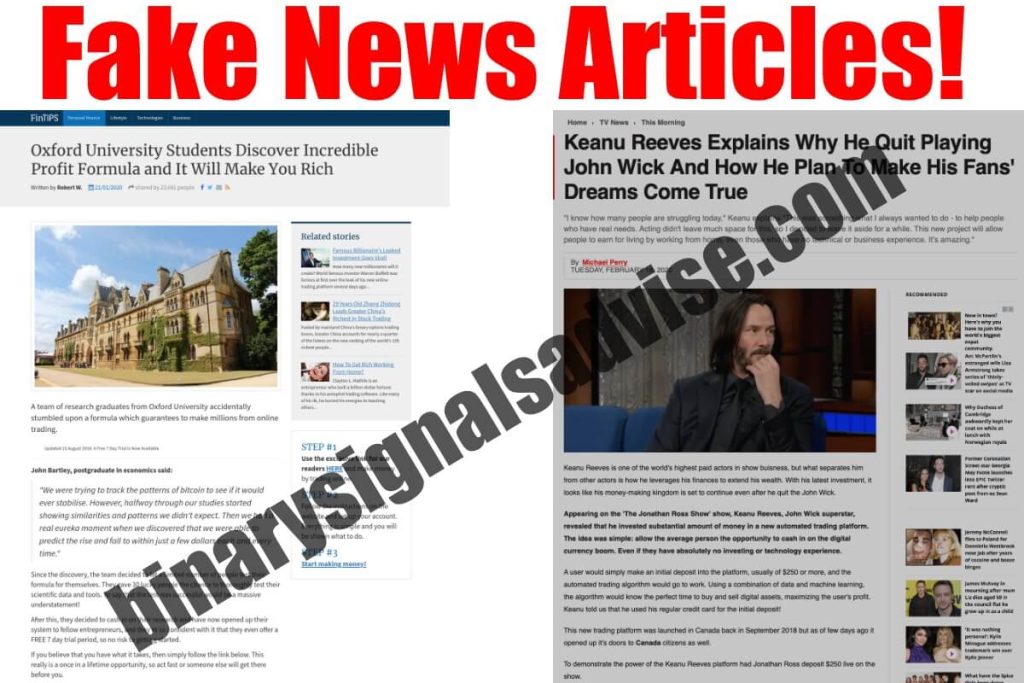 Bitcoin Revolution developers outdid themselves this time with fake ads all over the place. These ads are one of the reasons behind the increasing rate of patronage, no matter what we shout. Unfortunately, the ads are fake, and all of those respected individuals on them have nothing to do with the Bitcoin Revolution. For instance, one of the ads from the Bitcoin Revolution is that Tharman Shanmugaratnam launched a hi-tech digital project for Singapore residents. This Prime Minister who resumed office last year has nothing to do with these thieves. They only used his name to sell their lies. Many others, such as Ryan Reynolds, Piers Morgan, Richard Branson, and Chris Brown appeared on ads they know nothing about.

Some of these people have not ever invested in Bitcoin or any other cryptocurrency. So, how could they possibly be featured in that news? If this length of deceit is not enough to warn you, check the next point.

Our findings clearly show that all those endorsements of B.R are all fakes. The thieves are concocting them to sell this scam. Imagine using Jeremy Clarkson as a staunch supporter and benefactor of their scheme. Anyone who reads the fake statement about how he has gained from this sham will probably rush to try. According to the thieves, Jeremy stated that this dirty scam is the smartest investment he has ever made. He went further to say that the business has grown to 2,400% in one year. The highest lie is that Jeremy is a user of the platform and has increased his trading profits by 320% without lifting a finger. Yeah! The virtual autopilot does everything for him.

Another person that supposedly endorsed the trading joke is Simon Cowell. According to their forgery, Simon made profits above 630%, which was a groundbreaking experience for him. They even claimed he would have bought part of the company shares but missed out. Yeah right! If you believe that, you’ll believe anything. We got our real version of the news where Clarkson, who supposedly bought the shares, declared it a scam. According to Clarkson, he doesn’t have any knowledge of the Bitcoin Revolution.

Government of Malta posted a warning 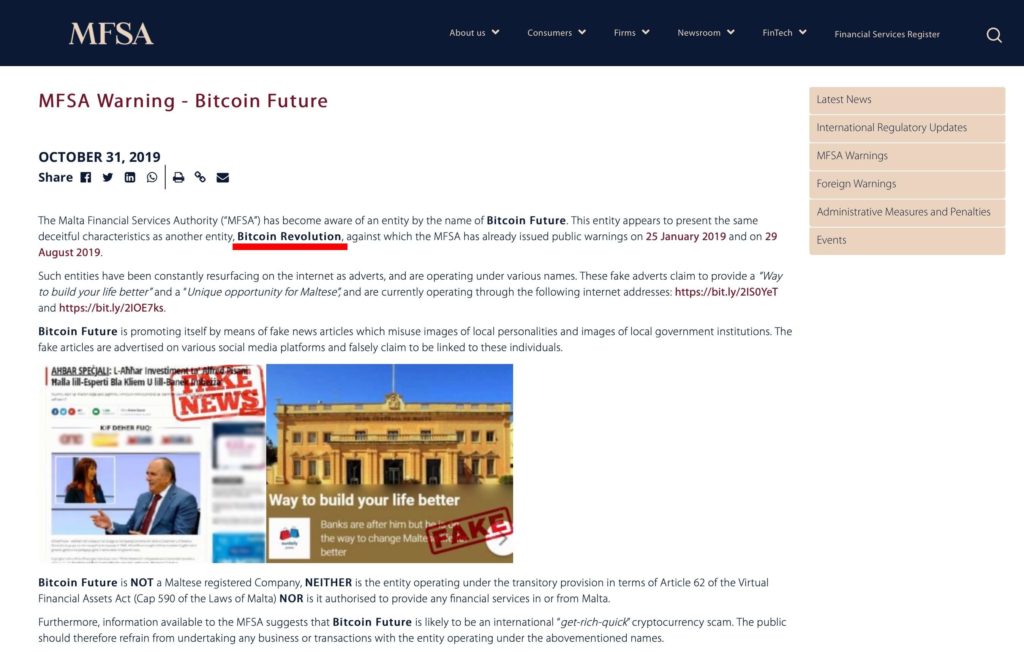 On the 31st of October, the MFSA released the news about the deceit called Bitcoin Future. According to their statement, they had earlier warned people about a similar scam last year called Bitcoin Revolution. We gathered that the MFSA (Malta Financial Services Authority) warned their citizens to avoid Bitcoin Revolution on 25th January 2019. Then, later on, 29th August 2019, they released another statement against the same fraud.

When it seemed that the watchdog had disgraced them, they changed their tactics. Instead of the Bitcoin Revolution, they started circulating another platform called Bitcoin Future. Unfortunately for them, MFSA still issued another warning against B.F and declared that it’s the duplicate of the Bitcoin Revolution. The funniest aspect is that the agency refuted their claims that Bitcoin Future is registered in Malta.

I was disappointed with the Bitcoin Revolution scam pitch video. Being in this business for years, I’ve watched many fake actors spewing thrash to convince us about their record-breaking discovery. Unfortunately for these thieves, I have a fantastic memory. The same video which they used to advertise other popular scams like Bitcoin Trader, Bitcoin Secret, etc. is the same one for B.R. if nothing else should convince you to stay away, this will. They promise millions, but they can’t spare a few bucks to create an impressive and believable sales pitch. So, how will you trust someone who doesn’t have a hundred dollars to help you make millions? Don’t hold your breath.

Another discovery that’ll make you puke is that three platforms are operating as Bitcoin Revolution. The first one is bitcoinrevolutiondotcom. The second one is profittodaydot net/ck/bitrevolution/, and the last one is securelywealthdotcom/bitcoinevolution/. All these platforms are the same; the contents are almost the same, and the promises all dubious. Imagine there is a platform where anyone can make $1,000 to $1,300 in a day. Why will hardworking folks continue to suffer?

If you still want to confirm these platforms as dirt, try creating accounts on them just like I did. The first thing you’ll notice is that the signup is a breeze. They don’t need your proof of identity at all, and you’ll notice many red flags as well. I tried them and learned terrible things such as fake awards, the use of third-party software, etc.

Now, instead of remaining as Bitcoin Revolution, they’re Bitcoin Evolution. Yes, they are evolving to hell, and you shouldn’t be a victim. Very soon, the law will catch up with them.

If these people are so great, how come they don’t have a responsive support department? If you doubt me, try them out. Everything you find on that platform is a fake. The three platforms have no indication of a support system except on bitcoinrevolutiondotcom. Scroll down to the Frequently Asked Questions and see their fake promises of being there for their clients. According to them, you can contact their customer service department whenever you need them. That’s a big fat lie. Try contacting them through their form, and it will return an error after submission. Is that a responsive customer care?

At least the first platform said something, but the other two are the worst. Profittodaydot net/ck/bitrevolution/ doesn’t have a contact page at all. Then try securelywealthdotcom/bitcoinevolution/, their confirmation email is broken, and you’ll wait for donkey years for nothing.

Is this where you want to make millions of dollars? I didn’t know that making money is so easy now. Please, avoid this trashy scam. They’re not worth your time at all. 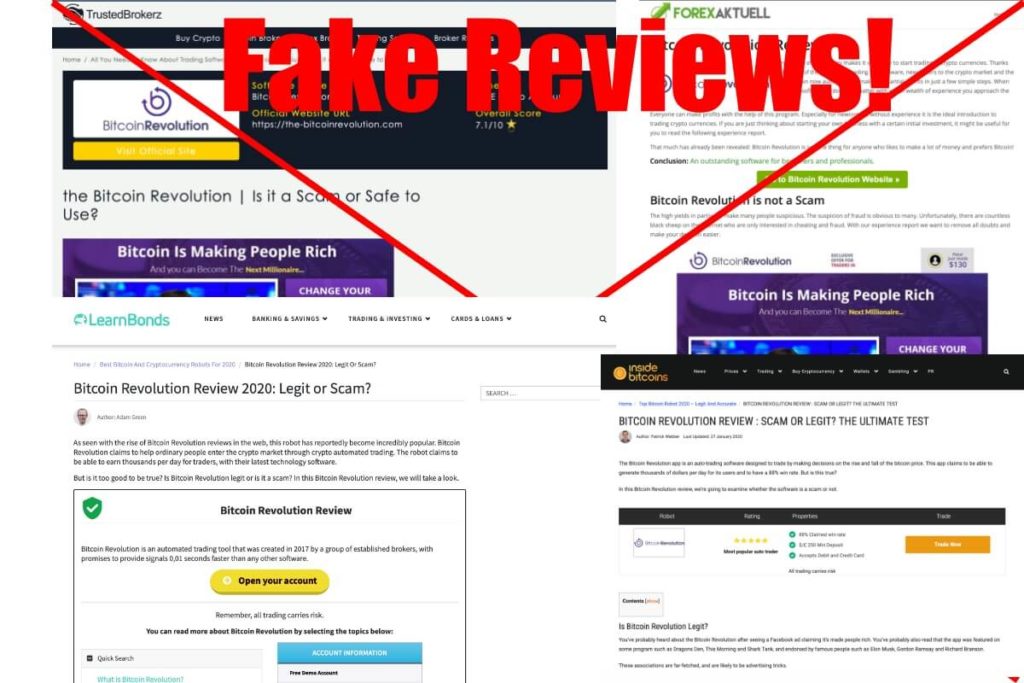 I placed this point here because it’s already something you should know. Every scammer and even some dubious website owners create fake reviews to assure people of their legitimacy. All the people you see on these platforms claiming to have made millions are not real. Creating a fraudulent review is not a hard task. Online thieves use them as baits to trap unsuspecting traders. It doesn’t matter where you read the reviews, once you hear the sound of thousands of dollars in one day, run! They’re lies. Most of the testimonials you watch on YouTube are from paid actors who haven’t invested in bitcoin at all. Some websites promote these thieves to earn affiliate commissions at your expense. In this internet era, it’s easy to confirm every claim you hear or read. So, don’t give in to the temptation of easy money.

Everything about making money shouldn’t be based on emotions, fake news, or rumor. Wealth is all about calculations, targeted risks, and opportunity utilization. Investment is great, and one of the wisest decisions to make. But on what platform should you throw in your eggs? That’s why smart investors step back and investigate before leaping. It pains me that many people are still allowing deceitful scammers to sell fake opportunities to them.

Bitcoin Revolution is surprisingly garnering lots of popularity and customers. Please, if you’ve not invested at all, don’t do it. If you’ve started earlier on, detach yourself now. Many people have lost a lot of money on fake platforms. Don’t ever trade on a system without a verifiable company. They’ve been duping people for years now. Fortunately, their secrets have been exposed, and the system is coming down. So, spare yourself the heartbreak and regret. Dump the Godforsaken system before the thieves bring you down.