If you stumbled upon Bitcoin Profit, aka BTC Profits platform mistakenly, don’t waste a second there. If it’s possible to block the site entirely, that’s what you should do. It’s one of those platforms that use stupid trading bots to defraud crypto traders. We’ve been hearing that Bitcoin can make us rich for years now. Scammers have twisted the phrase in many ways to deceive unsuspecting investors. Don’t fall victim by believing their lies. There’re many HYIPs online, and Bitcoin Profit is the worst of its kind. They promise big unrealizable profits and hire actors to pose as users of the platform.

The real reviews about this trading Bitcoin Profit are that they’re dupers and fraudsters who’ll do anything to steal from you. There’s nothing legit about their business, and they leave a trail of disappointed and heartbroken traders in their wake. Keep your money safe by trading on legitimate platforms that operate under strict monitoring.

As you read this Bitcoin Profit review, you’ll discover some dirty secrets and tricks concocted against you. 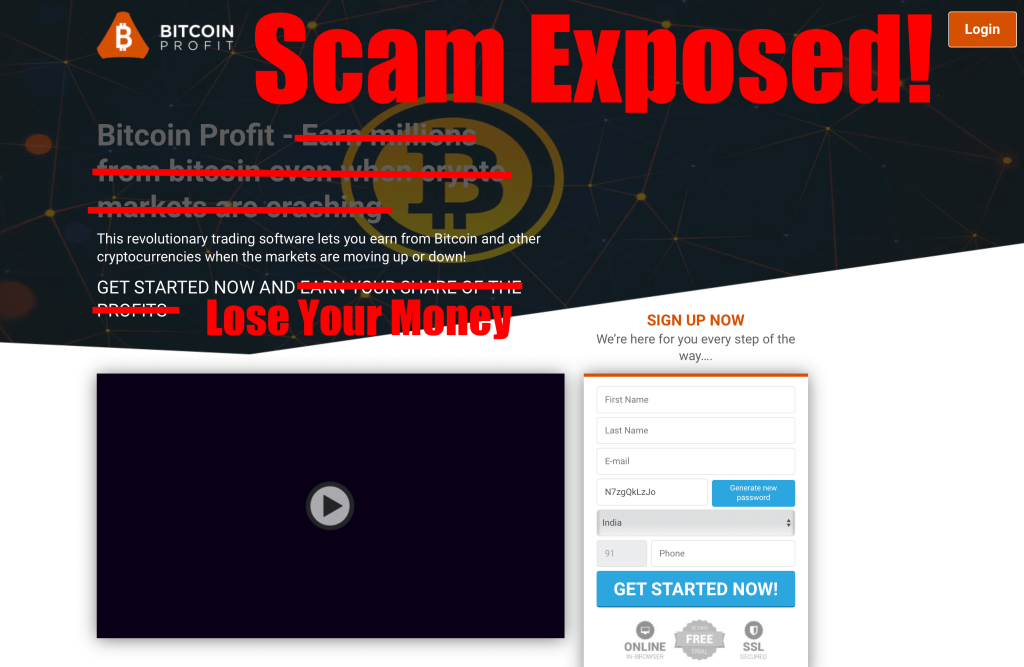 What is Bitcoin Profit aka BTC Profit

BTC Profit is a fake trading robot created by miscreants to deceive and confuse traders. It’s supposed to make millions for you during crypto market crashes. From the website of Bitcoin Profit, you can see where they boldly stated that traders could make millions even when the market is slamming. They also made terrible promises of how the platform will help you to trade Bitcoin for real cash.

If you watch their sales video, you’ll just be hearing worthless lies that sound exactly like what we’ve seen from other scammers like them. The thief calling himself John Mayer claims he has unraveled a secret to the get-rich-quick. You and I know that both he and his cohorts are spewing rubbish. According to him, they’re creating a platform where people can make more money than they ever expected with an initial investment of $250.

Sometimes, I wonder if $250 is a magic figure for scammers. All the dubious trading robots we’ve come across demand an initial investment of $250. Unfortunately, this Bitcoin Profit is using counterfeit software with nothing to offer.

We have many reasons to blacklist this Bitcoin Profit trading robot.  If you look closely at the platform, many red flags will spring up immediately. So, let’s explore some of these red flags and keep your money safe.

We always emphasize that any platform where traders will make millions should represent itself well. A rich man can’t hide no matter how hard he tries to play down his wealth. The thief behind Bitcoin Profit can’t even afford his meal from what we can see. His level of poverty and desperation is evident on the platform. He cloned the same backend, which another scammer used for his visionary wonder robot. Check the Cryptosoft platform and understand what’s happening. The miscreants behind that app also claimed the robot could make $5,489 profits in 24 hours. That’s one of the biggest lies in the century, and we believe that Bitcoin Profit John is in bed with those idiots.

We also discovered that BTC Profit has other clones offering the same thing and targeting unsuspecting investors. On some of the cloned sites, you may not find the sales video and fake testimonials. But you will notice how each of the clones is connected to offshore scammers in the name of brokers. You’ll also find fake statements, false information, and signals feed that they’ve set on the win.

We know that most of the time, they create these clones to get people’s email addresses. So, if you don’t want to be receiving useless junks in your mailbox, don’t register on these platforms.  They are liars with no handwork but ready to steal from the masses with fake promises. 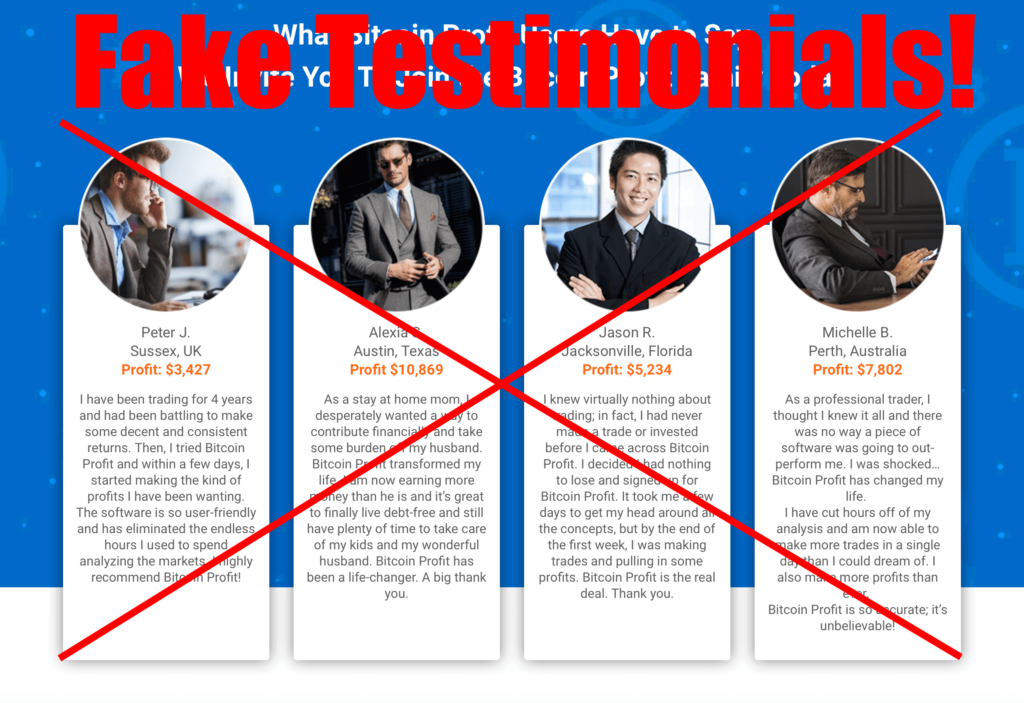 There are many testimonials about the Bitcoin Profit, aka BTC profit. Even the reviews are quite convincing. If you’re not experienced in online crypto trading, you’ll swallow every rubbish they spew. Don’t mind those names and voices speaking and writing promotional sentences. They’re all actors and actresses who’re making money off this scam. John Mayers (if it’s even real) hires and pays them as little as $10 to lie to you.

Normally, one of the best ways to prove the authenticity of a product is to hear from real users. It’s always better to get your information from people with firsthand experience with it. Unfortunately, cheap actors are flooding the market, and companies are utilizing their services wrongly. If you can pay someone to praise your product on YouTube, why would you have to spend so much on the advert again? This is the reason we have more fake testimonials than the real thing.

The likes of Bitcoin Profit owners are confusing many people with these fake testimonials. If you want to get the real information about any trading platform, visit legit websites and social media channels. Also, you can visit the websites of reviewers who have won the trust of readers with their sincerity. As for those testimonials and videos on the Bitcoin Profit platform, they’re fakes and useless. So, don’t trust what they say.

It seems that the latest trendy among crypto scammers is to use celebrities without their consent. We’re sure that very soon, one of the thieves behind this tactic will be apprehended and punished. When I saw the news page where Jim Davidson stated how Bitcoin Profit helped him to bounce back from bankruptcy, I laughed. It’s such an obvious lie that even a little child will doubt it. The stupid fools even went far to claim that Jim made this revelation on the show called “Good Morning Britain.” According to what he supposedly said, trading on the BTC Profit platform is easy, and the results are sure.

Also, the owners used pictures showing the platform on respected and popular shows such as Shark Tank and Dragon’s Den. We decided to confirm these pictures by watching the shows. Unfortunately, there was nothing of such on them. We’ve even received confirmation that most of the celebrities quoted by these thieves have denied connections with them on their various social media accounts. From all indications, everything they claim is a lie. There is no celebrity endorsement, no news clip, no real testimonial, but fake campaigns.

The thieves claimed that the robot records a 92% win rate making it possible for a trader to smile when others are losing. Also, they want traders to believe that John Mayers and his architects, or whatsoever he calls them has discovered the pathway to great wealth. These promises are consistent with what we know as a BTC high-yield Investment Program. These programs trade on behalf of investors and supposedly makes big profits for them.

Fortunately, the Security and Exchange Commission has warned traders to avoid such programs. Most of them start as legit and profitable. At a point, the owners will stop paying out money to users daily. Some of these platforms can give you some fast cash in a short while, but after some time, your money is gone for good.    Luckily, you can spot HYIPs from afar if you follow the clues from SEC such as

From what we’ve seen, Bitcoin Profit, aka BTC Profit, is an HYIP. Any prudent investor will never invest in such a lie in the name of crypto trading. So, you shouldn’t believe their lies and lose your money.

The best decision to make this 2020 is to avoid scam trading systems. Bitcoin investment is viable but also fraught with many risks. There are many ways to make money on Bitcoin, which includes buying and reselling or trading on legitimate platforms. We already have trading tools powered by Artificial Intelligence that can aid your chances. But the truth is, they’re not a guarantee for success. So, we suggest that you take the time to learn the skill and investigate more on trading platforms.

Platforms such as Reddit can be an excellent source to learn trading techniques. Also, you can start trading on legitimate exchanges that offer excellent opportunities for newcomers into the community. Don’t believe everything you read online. Many people have lost their life savings because they believed in lies. Beware of Bitcoin HYIP such as Bitcoin Profit, aka BTC profit.

Many of such platforms are filling up the internet with dubious claims and questionable approaches. Always remember this sentence “If it’s too good to be true, it’s a lie.”

Don’t be a victim of online scams in the name of crypto trading. There’s no get-rich-quick sham that lasts long enough to recoup your investment.