If you love your life, don’t ever invest in Bitcoin Pro. It’s one of those scams that can heighten the urge to jump off the bridge. So, if you don’t want the thoughts ever to cross your mind, avoid this trash because the stupid trading robot will push you over the edge. It’s not every man or woman that can lose millions and survive it. The most painful part is when you use your retirement or college funds to invest thinking to double it but fails. Then, even a saint can commit murder. Therefore, we urge you, please run away from Bitcoin Pro before it’s too late.

We’ve taken time to investigate Bitcoin Pro, and it left a distasteful taste in our mouths. Our findings are so terrible that we’re working hard to protect our readers. The dull brains behind this software are thieves, and they have more cohorts than you can imagine. By flooding the web with fake news, testimonials, reviews, and lies, they’re duping many investors big time.

Regrettably, most people don’t have time to look before leaping. When they hear the words “passive income,” they throw in money anyhow. We don’t blame your enthusiasm, but you need to be more careful. That same level of enthusiasm and interest is what scammers love. Once they hook you, they’ll milk your pockets dry and close up shop.

So, whatever you do, be careful on the Internet. Many nincompoops are now joining the affiliate marketing train. Their commission-mindset has turned them into broad daylight robbers. They can spew anything, do anything to get a commission. If you fall into their trap, you’re a goner.

Bitcoin Pro is one of the tools they’re using now to defraud people. It’s useless and worthless. Whatever lies the promoters are releasing has lost impact on smart investors. It’s only the newbies that are carelessly funding their crappy robot.

If you doubt our findings, go ahead and read everything we discovered about Bitcoin Pro scam. 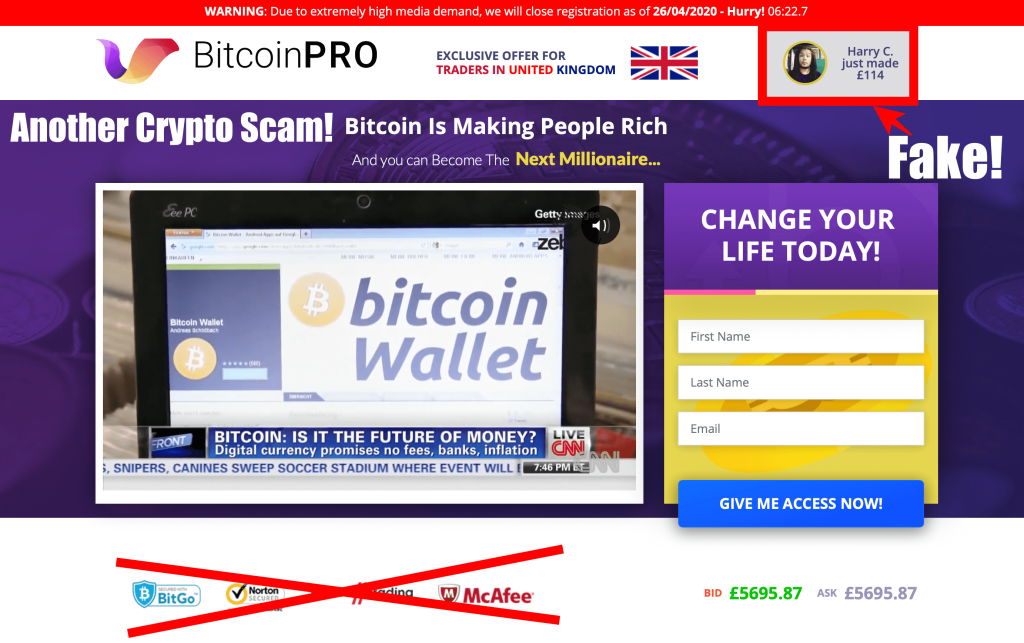 This platform is supposedly a software that facilitates crypto trading. According to the invisible owners and brokers, it’s an automated robot that predicts trades at a 99.4% accuracy level. This means that the robot doesn’t ever lose a trade. Once you invest, you’re going to make profits on every trade without a miss.

All it requires is your registration and an initial investment amount of $250 /£250 /€250. According to the liars, everything is free, and there are no hidden charges whatsoever. One of their hypes that got me mad was saying that Bitcoin Pro has advanced programming that ensures security, efficiency, and accuracy.

Well, anyone reading such lines may want to join and benefit from the app, not knowing it’s an illusion. They also said that they work with the best brokers in the industry. Thank goodness we discovered them for what they are-scammers.

There’s nothing good about Bitcoin Pro. If you ever try this platform, you’re going to call your mom for consolation. They’re out to get you, and the sooner you run, the better for everyone around you.

Bitcoin Pro is a Scam and Nothing More

Initially, we always pointed out that the scammers behind these dirty apps never disclose their identities. We hammered on the importance of transparency when it has to with monetary transactions. Our efforts paid off, and people started avoiding them since they couldn’t verify their identities. Another strategy then was to create a fake company name with a fake company address. But at a point, we exposed that too, and that madness stopped.

Now, the tactics have changed. Scammers are now playing at being legitimate by employing different kinds of tricks. Here are some of the dangerous strategies flying around. 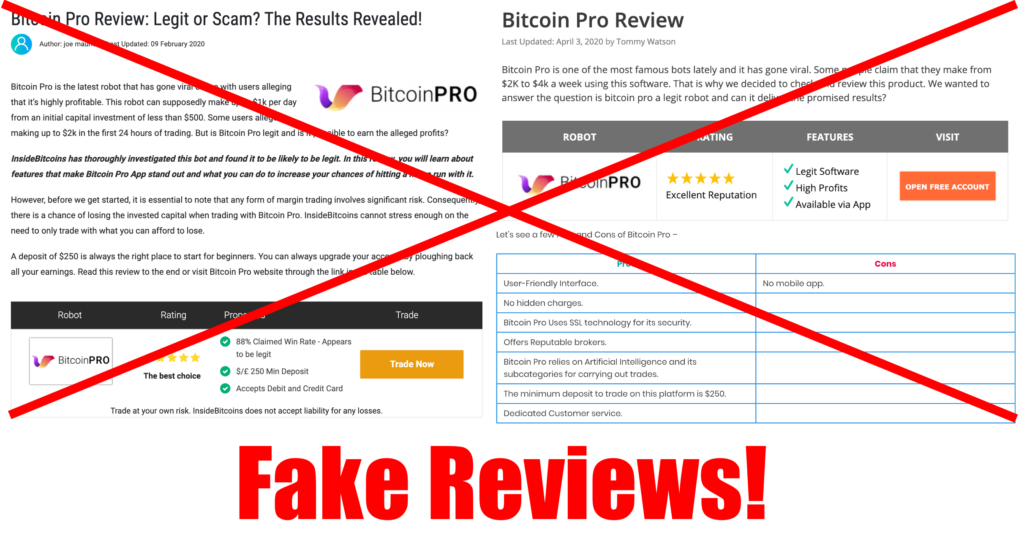 One of the best ways to confirm the authenticity of a product is through customer reviews and site ratings. Many people have developed the culture and tend to check reviews and ratings before trusting any product. Unfortunately, online thieves are exploiting it to deceive people. Now, they’ll give commissions to some reviews site owners whenever a trader invests in their dubious scheme through them. You can imagine the frenzy to deceive more people for more commission.

This is why you shouldn’t trust the ratings you see all the time. Try to find out who is rating the app or product. What experience does he/she have with it, or on what grounds is he/she rating the product as 5 stars? When you get these answers, you’ll decide if it’s worth your while.

We came across some sites ranking the Bitcoin Pro scam with a five star. What nonsense! An app that’s stealing money from investors and someone is brandishing it as a five-star software? This is why you must always navigate the web carefully. There are many ways to lose your retirement and college funds. If you only focus on the fake promise, you might lose something very important. 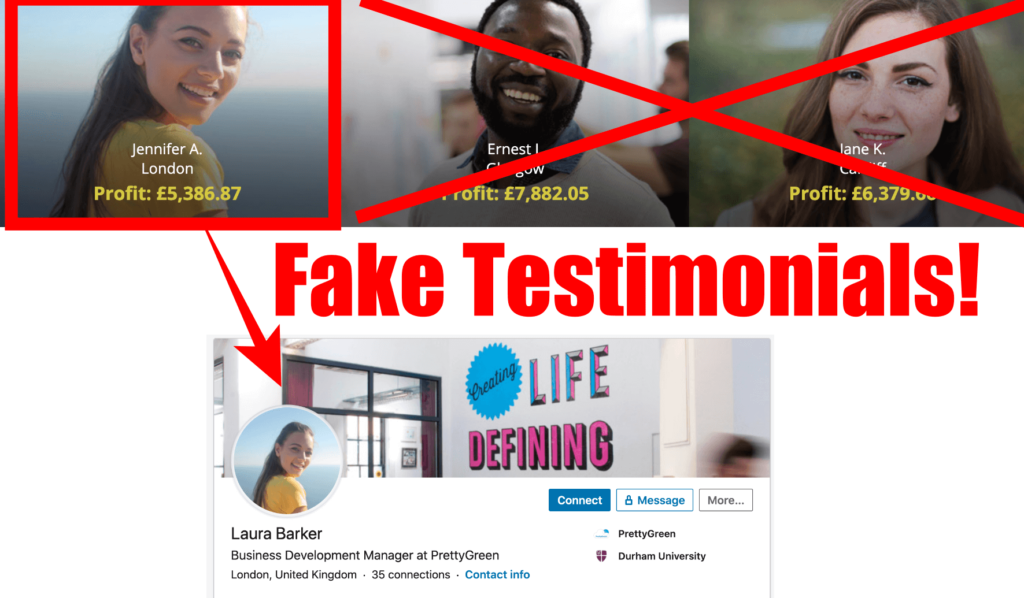 When you visit some of these scam websites, you’ll notice many testimonials from people who supposedly made millions from it. Yeah right! Some of the testimonials will be flashing across the screen, showing you the money they’ve just made. We hate to say it, but they are all lies. None of those faces and names you see are real.

So, don’t ever believe such tricks. It has lasted as long as the Internet. 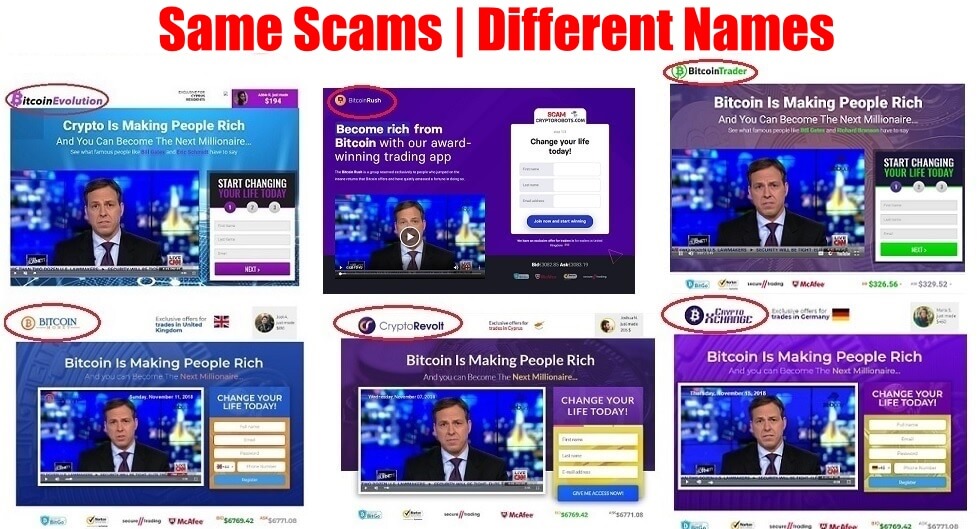 The Bitcoin Pro app is not a new one. In fact, it’s been circulating all over the internet but under many names. Yes! Not just one name but many. People have invested in it as Bitcoin Trader, Bitcoin Evolution, Bitcoin Future etc. Once they dupe enough people and discover that their secrets are discovered, they’ll call it another thing and launch it again.

When you check many scam apps like the ones we mentioned, you’ll discover that the sales pitch is the same all the time. You’ll see the anchorman for CNN, Jake Tapper, talking about the never-ending possibilities of Bitcoin. The line that you’ll be the next millionaire from Bitcoin seems to be converting highly. So, the scammers are using it every time they rename their junk.

Also, when you check the pop up after your login, you’ll see that it’s the turnkey solution that affiliate marketers use to access a dirty app for commissions. Once they promote it and wins an unsuspecting trader, the scam broker will send their cuts to them.

So, no matter what, don’t invest in Bitcoin Pro.

We are no longer surprised at what these thieves can do for money. They came up with claims that Bitcoin Pro was featured on authority news sites such as Forbes, TIME, CNN, etc. All these are lies. These sites grew their audience by being truthful, transparent, and careful. They can’t feature a dubious app with questionable characteristics.  The scammers knew that people might believe them more if they make this claim. But it’s all a lie. 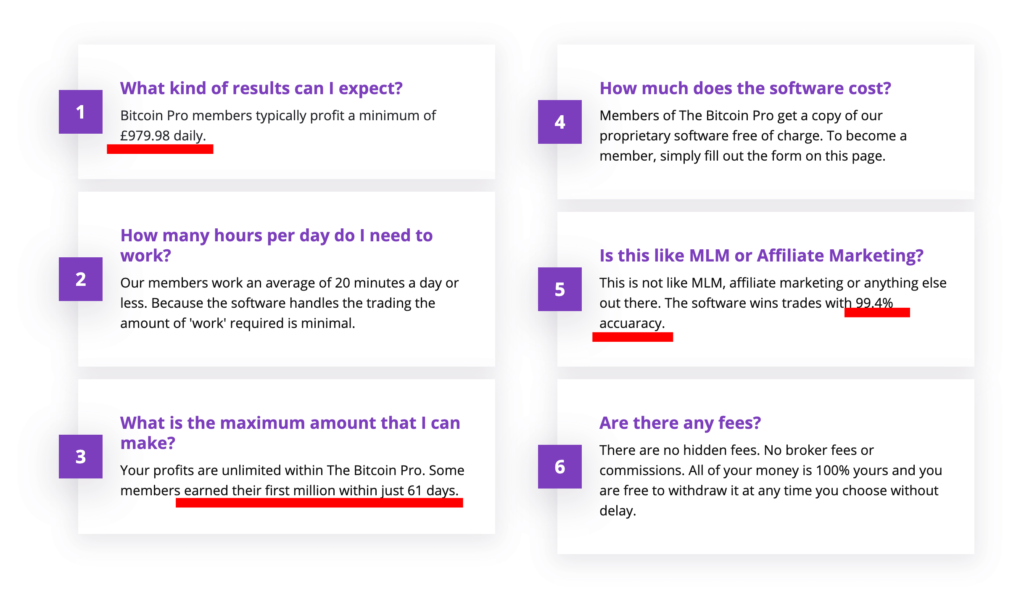 Another claim is the 99.4% accuracy rate and the possibility of making $1000 daily. Such fake promises are no longer holding water with us. We know the real deal, and there’s no way you can convince us otherwise. This crappy robot doesn’t make any accurate predictions. So, avoid it.

We’ve seen many articles where celebrities are endorsing Bitocin Pro. If you haven’t heard, that’s the latest trick for trading scammers. They use celebrities who people respect to sell their crap. They’ll use their pictures and write promotional content about Bitcoin Pro. We investigated this strategy when it surfaced and discovered that it was all lies. So, the next time you see an article where a famous personality is supposedly promoting an app, run.

These people don’t even invest in Bitcoin. The ones that do have nothing to with Bitcoin Pro. They’ve made names for themselves in their various industries and have nothing to do with a dirty, slimy robot. So, don’t believe the crap. If you come across articles featuring people like Eric Bana, James McAvoy, Gordon Ramsey, Shark Tank, Jamie Oliver, Martin Lewis, etc. don’t believe anything you read about Bitcoin Pro. They used their pictures and nothing more.

Bitcoin Pro is a big disappointment to crypto traders. Some people who tried them lost everything they invested in the dubious brokers. There is no advanced technology, and there are no endorsements. The testimonials are fake, and the app is a clone.

If you want to make money trading with Bitcoin, research more, learn more, and use a certified broker. We are not saying they’re all fakes. There are legitimate ones out there for you. All you need is to spend a little time investigating widely before you leap.

It’s not right to feed lazy bones that haven’t put in a day’s work in their entire lives. So, avoid Bitcoin Pro and keep your money safe