Any opportunity that appears too good to be true is always a scam. There is no easy way of making money with or without bitcoin. So, anybody spewing that trash to you is a thief who’s looking for a quick payday. But the question is, will you be the fall guy, or will you be the one who got away. We go with the latter, and that’s why we present this Bitcoin future review to keep you safe and distant from online scumbags.

Whoever is behind this crappy robot is a total wacko. There’s nothing but losses and regrets for anyone who goes near the software. It was designed to steal from crypto investors, and that’s why it smells. Bitcoin Future trading app is not legit at all. We’ve checked it out, and many red flags jumped at us.

We’ve investigated many scams like this one for some years now. They all have some things in common—quick returns on investment, millions without stress, and multiple lies and deceitful tendencies. When you look closely at the white-painted sepulcher called Bitcoin Future, you can’t help the revulsion that it evokes. They’ve so mastered the art of deceit that even pro traders sometimes fall for their scams.

The latest strategy is to use fake news with respected celebrities to promote their crap. We’ve discovered these antics, and as you read on, you’ll learn more. But don’t forget this, Bitcoin Future is one of the dirtiest scams the crypto community has ever seen. 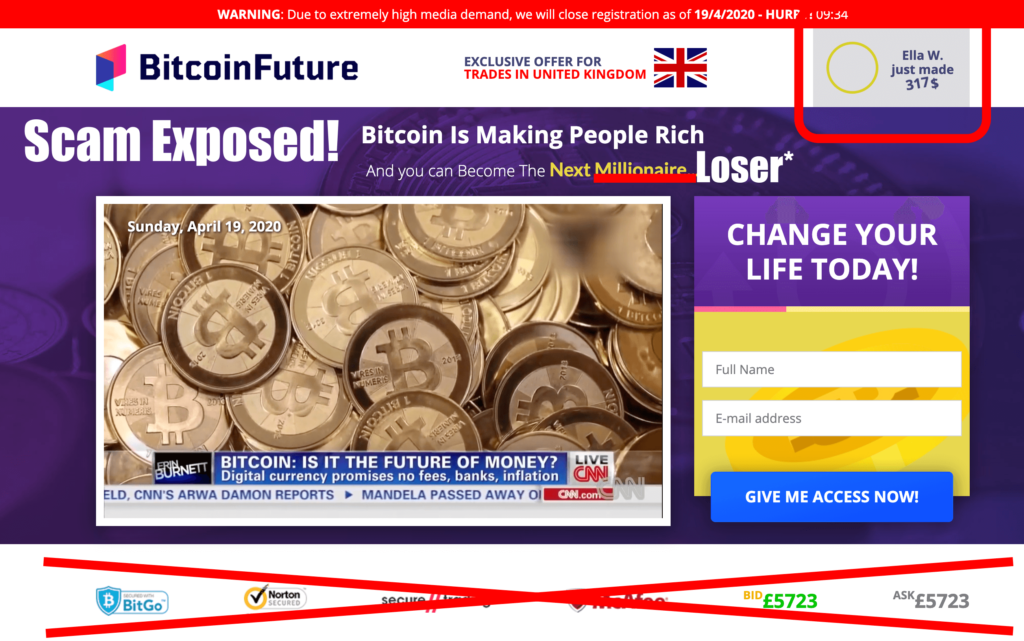 How does Bitcoin Future Scam work?

According to what we’ve seen so far, the scammers advertise that traders only need to create an account and make a deposit. Once you have given them your hard-earned money, you can just activate the live-trade feature and start packing money like leaves. That’s funny though because many investors have lost their money trying to make gains.

The lure is; they mentioned that after activating the robot, you could sit back and watch it make profits for you. Then after the trading session, you shut it down and reopen when you want to eat the next profit. It all sounds funny and stupid. According to their cohorts, busy people who want to make more money can use the Bitcoin Future trading robot to grow a passive income.

Like we said earlier, “Too good to be true.” This crap is just a deceitful attempt from lazy fools to raise some cash. By the time you believe their lies and invest, you can say goodbye to your money.

Let’s explore some of their antics that expose the bitcoin future scam. 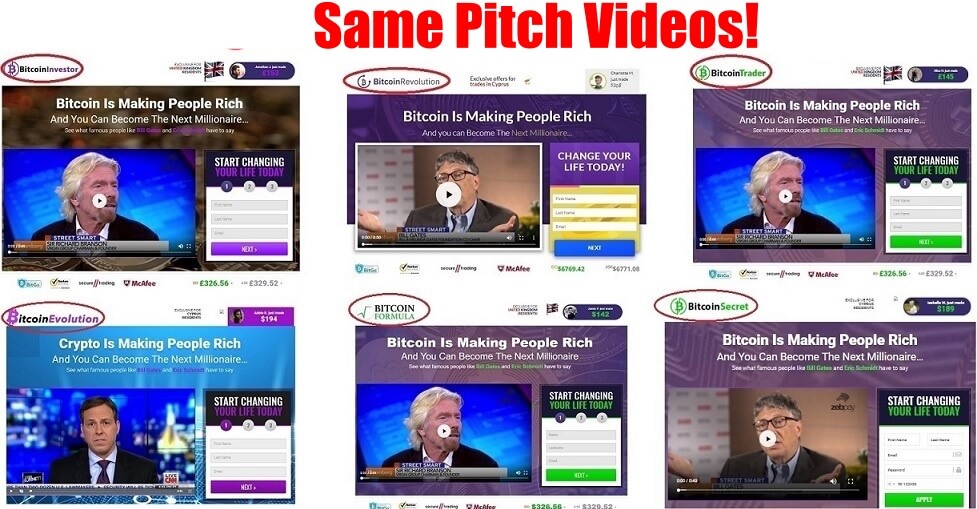 Have you ever heard this saying that “Birds of a feather flock together”? That’s what we see online these days. The time is running out on scammers, and they’re more desperate and impatient. We still suspect that these scam trading robots are coming out from some group of thieves banding together somewhere. If not, how come you hear the same sales pitch from all the dirty software that hit the community?

We took our time to listen to the likes of Crypto Revolt, Bitcoin Evolution, Bitcoin Secret, and Bitcoin Revolution. Do you know what we discovered? They had the same sales video without changes. So, we concluded that it’s either the same group of idiots or people are now creating lies in the comfort of their bedrooms. All they do is copy and paste sales pitches from one website to the other and expect you to fall for their crap.

So, if Bitcoin Future is using the video, it means that it’s in bed with these other scam robots

Yeah, anybody can design an ad campaign with the right tools, so nothing special there. Scammers are having a field day using Google ads, Facebook, and other Media to offer their scam trap. All the hype is to grab your attention and steal from you. The deal now is to create interest by using big shots to sell their crap.

We’ve noticed this latest trend, and we’re doing everything in our power to expose them. Online scammers are now selling fake news piece with the names of big guys in different industries. Yeah, they believe that if you hear someone like Elon Mask talking about the millions to be made in Bitcoin, you’ll rush to invest. But the question is, has the man ever done business with Bitcoin? The answer is no! So, if you’re not careful, you’ll lose your money online miscreants.

For instance, Bitcoin Future scam used some celebs like Shark Tank, Daniel Radcliffe, James Mcavoy, Elon Musk, etc. to promote their dirty app. However, most of these men have discredited them and threatened to sue if they ever get hold of them. So, the next time you read or hear about Bitcoin Future from someone you respect, look closely before you leap.

Another terrible lie we’ve heard from the thieves behind Bitcoin Future is the daily profits. Without much emphasis, you should know that it’s all a lie. We are yet to find a crypto trading app that can generate a profit of $1,121 every day. According to the shameless dumbs, their trading robot offers a 99.4% accuracy on trading signals. This means that anyone trading with it is sure to make millions without stress.

This is a typical hype associated with get-rich-quick scams online. If you doubt us, check out other scams like Bitcoin Revolution, Crypto Revolt, Bitcoin Evolution, Bitcoin Secret, etc. They all promise high accuracy rates and huge sums as profits. The most annoying thing is that they want you to believe that you can make thousands in a day.  So, if you trade for a few months, you’re already a millionaire. Yeah right!

If crypto trading is so easy, why are we still struggling? If trading with a robot can give anyone $1,121 in a single day, we’re all going to fly in private jets. But unfortunately, the only thing you’ll get is losses. They’re after milking you dry. The crappy robot doesn’t make any accurate predictions. You’ll find out too late when you’ve already deposited your money with an unregulated broker.

Nothing changes with these fake crypto robots. The dullards behind them don’t have the skill or even the patience to go legit. That’s why they revolve with the same crew every time they create a new trick. Bitcoin Future is using a thief who calls himself a broker in the name of Hybrid Reserve to deceive you. The most interesting part is that this same broker is active in duping people from other platforms as well.

How come most of the scam software we tried assigned us to this broker?  This means that he is in bed with the thieves. They’re probably creating these systems and sharing the profits. Using an unregistered and unregulated broker is one danger sign of a scam.

We also noticed that these scam software share the same signup popup. There is no difference whatsoever. Even the tagline about how bitcoin is making people rich is the same. When something is duplicated multiple times and offered, it means it’s a fake. 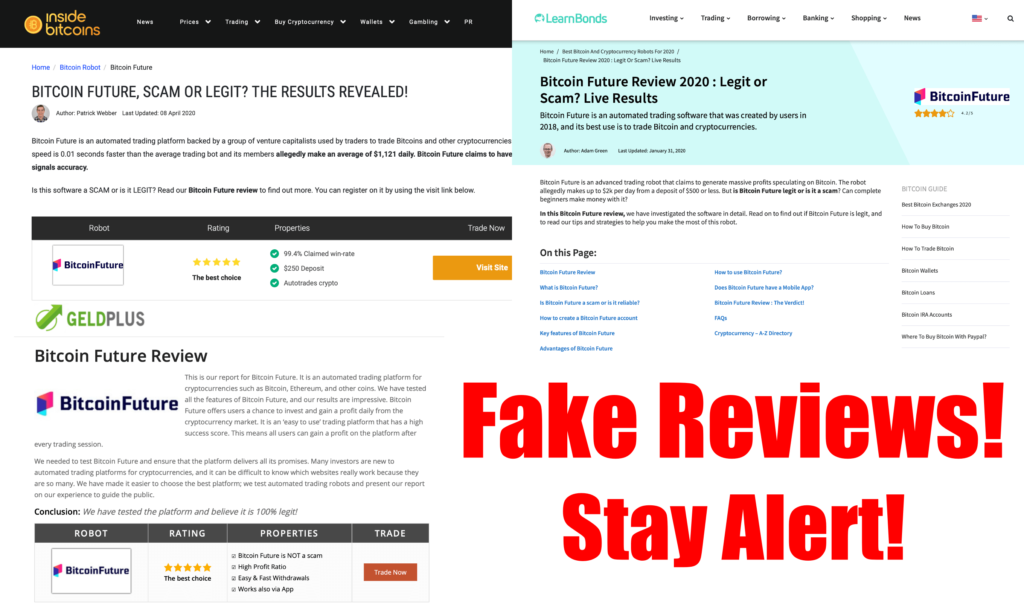 We are really disappointed with some fake reviews sites that will promote dirty scams just for recognition and traffic. Many newbies will usually want to see what their trusted sites have to say only to be deceived. It’s not all the reviews site that carries an unbiased rating. Many of those sites online don’t have time or interest to investigate anything. For them to be legit and trustworthy, they should have a first-hand experience of what Bitcoin Future does before rating them. So, it’s always better to look before you leap. Better still, carry out some research on your own to learn more. Crypto trading can be amazing and profitable, but it can also be stressful and heartbreaking. It’s always better to know it more than believing what others say.

Hold your money tight. There are many scammers online who create one tactic or the other every day to steal from others. Bitcoin has always been an interesting cryptocurrency. Many people make money from it, and millions of others also lose money in it.

Trading is one of the ways to make money with bitcoin, but it’s never so easy. You have to pay attention and learn the tricks and tactics of crypto trading before you succeed. Also, you must research thoroughly before using any platform to avoid a scam.

We’ve seen many trading robots claiming to predict accurate trades for investors to make millions. They usually come out with guns blazing, but after a while, they’ll vanish. Why? When they dupe enough people, they change their names and strategy for more mischief.

If you must trade online to make profits, get a legit broker, and master the art. Bitcoin Future is a dirty app that has nothing to offer. Those behind it are looking for quick cash. If you fall for their tricks, you’ll lose your money.