If someone comes to you and introduces an app that can make you $250,000 richer in one week, what will you do? What if they tell you that you can be a millionaire in one year just by trading on the app, will you jump and invest? I hope not because these promises are very wrong, exaggerated and misleading. They are all claims to entice you into losing your money on fake trading systems like Bitcoin Focus Group educational and trading robot. No matter how professional the name sound, after reading this Bitcoin Focus Group review, you will keep your money where it belongs; in your pocket.

The sudden spike in the price of Bitcoin and other digital currencies is causing many people to make mistakes. It is quite okay to utilize the opportunities but doesn’t forget that scammers are also desperate to make money. If you are not careful, you will continue to lose money to developers of fake apps like Bitcoin Focus group. Imagine you fall victim to 10 of such scam software in one month; you may end up losing $25,000 in initial deposit. My candid advice, be prudent and always thread with caution especially when it comes to get-rich-quick schemes.

Bitcoin Focus Group is a new system from an unknown person who is answering David Kramer. He is saying that traders who use the app have the opportunity to work with a group that only aims at enriching them with a cash-flowing robot. This app also hit the market with yet another cock and bull story of incorporating education with patented auto trading software that will make few people millionaires in one year.  In fact, these scammers sound convincing when you watch their video presentation till you notice the lies behind the app.

According to what you will hear, the group is not an affiliate of any scam platform because they operate under strict regulations and also protect the interests of their clients. Afterwards, you will hear about the origin of the group and their purpose of making newcomers wealthy. To convince you further, they will tell you that they enrich their members through trading secrets from the best Bitcoin traders, engaging in ICOs and algorithm trading. They will also explain that Johnson and Rutger Focus Group is the company behind Bitcoin Focus Group and they only opened the group for a limited period. So anyone who wants to cut a share of profits should make haste and join before they close the group again. Imagine the strategy to galvanize innocent traders into action. Also, there is a provision for free access if the users will provide feedback about the software. I mean, who wouldn’t be interested in such an opportunity.

Bitcoin Focus Group sounds very legit, but when you look closely, you will find much-damming evidence to prove otherwise. Some of what I discovered on the close investigation is disappointing, and I want you to know them too.

Bitcoin Focus Group Is Scam! Find Out Why! 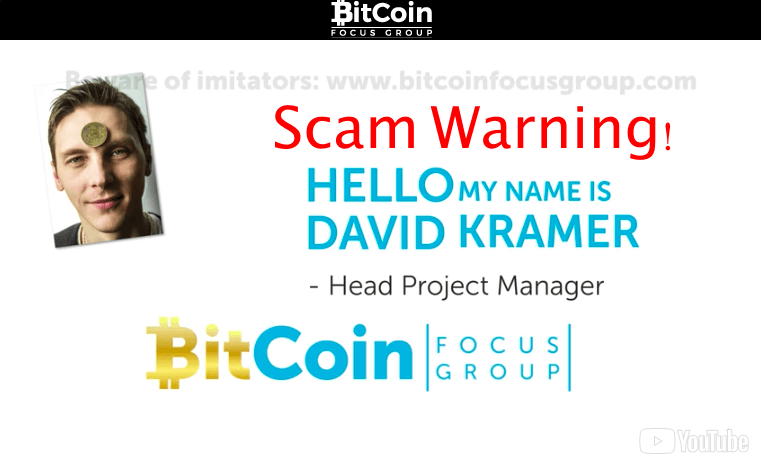 There is no company and no David Kramer as well.  The person of David Kramer is a fictitious character. His claims of being the Project Manager of a management team Johnson and Rutger Group are all lies. I am not surprised because this strategy is common to all the fake trading apps I have investigated. They get an actor and pay him to say all manner of nonsense to deceive people and dupe them.  If a company doesn’t exist, how can it be regulated and also protect users interests? All these are lies. 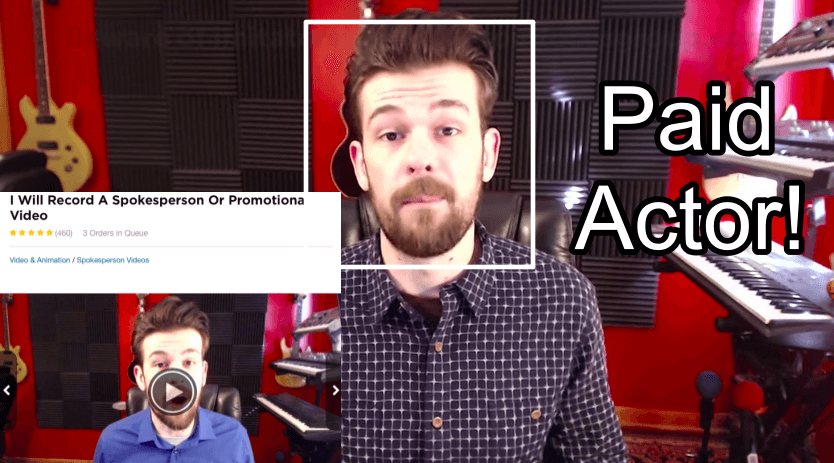 Well, the developers of Bitcoin Focus Group also hired actors from platforms like Fiverr.com to write testimonials. One of such fake I busted is Sebastian Kaufmann who works on Fiverr as an actor. The funny thing is that this same guy gives testimonials on almost all the fake apps for a fee. So is it that he trades on all of them or doesn’t know anything about crypto trading in the first place? Pathetic indeed! Don’t be deceived by the testimonials of actors who know nothing about trading.

Another call-to-action strategy which the fake developers used is saying that they will only focus on enriching 25 people only since their time is limited. This strategy is like forcing your hand to pay $250 to an unregulated broker who will give them some percentages. Don’t mind them; the so-called group will continue to take as many victims as they can deceive. Why will they stop at 25 persons when they can make thousands of dollars from many people? I know that many people will rush to deposit, but it is not the right move at all.

Fake claims of awards and articles

Oh yes! There is another lie from Bitcoin Focus Group about an award as the best trading software from “Global Crypto Magazine”. The problem of this whole claim is that the so-called magazine doesn’t exist, so the award is nonsense. Also, notice the press articles about this crappy app that they show, they are all fake and didn’t appear in Business Insider.

If you want to make money on crypto trading, don’t use apps like Bitcoin Focus group software. The owner of this group and app is not existing. Also, there is no legitimate company behind it. The main aim behind its development is to enrich scammers through an unregulated broker who will run away with your money.

To be on the safe side, trade on an app that is real and regulated. Don’t mind the amount of profit which scammers promise or listen to their claims of trading secrets. The whole purpose of this nonsense robot is to steal your $250 initial deposit.

The truth is that it is not so easy to make huge profits on crypto trading. Even some legitimate app developers will make provisions for demo accounts that is free so that you can learn the skills before depositing real money. My advice, stay far from Bitcoin Focus Group.