If you have some spare cash to gift to thieves, create an account on Bitcoin Evolution. This platform is supposed to be an online crypto trading app. But we’ve discovered that it only abut duping people and nothing else. Many of our readers have been complaining about it. So we investigated the fools and decided to expose their lies.

Bitcoin Evolution is simply a clone of other online scams. The fools behind it are the same ones that have created many dubious crypto apps. Their aim is to lure traders into believing false claims and lose their money. Unfortunately, we’ve seen many of them online. There is nothing for anyone except losses.

Some miscreants are busy everyday cloning and launching these apps to steal money. Once you invest in any of them, the brokers give a commission to the dubious promoters, and that’s it. It’s their stock in trade. They are after their percentage and don’t care if you lose all your life’s savings. So, if you have your own best interest at heart, avoid the likes of Bitcoin Evolution. 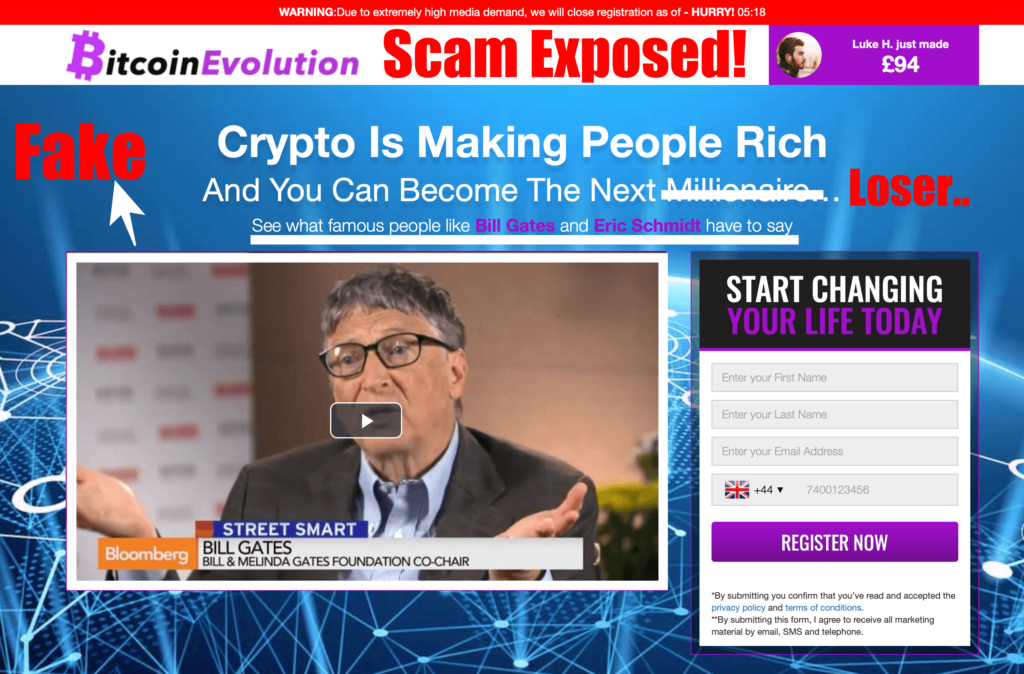 What is Bitcoin Evolution?

This app claims to be an automated trading robot, but it’s not. Instead, it’s a cloned app that some greedy people created to steal from crypto traders. It’s a get-rich-quick scam that has no foundation. There’s no legit company behind it, and no one can identify the owners.

Bitcoin Evolution is jointly owned by fraudsters who call themselves brokers. Many people who registered found themselves connected to one broker or the other. It takes only a careful investor to avoid the likes of Bitcoin Evolution. The scammers created a believable illusion to deceive newbie traders.

According to their sales pitch, this software makes 99.4% accurate predictions of trades. As a result, traders who use the robot can make up to $1,300 every day. If you continue trading faithfully, within 61 days, you’re already a millionaire. From what we gathered, there’s no limit to the level of profit you can make with Bitcoin Evolution.  So, you can relax and do what you enjoy while the trading robot will make money for you. You don’t have to do anything except to make a deposit and watch your wealth grow.

Supposedly, there are no restrictions on joining the platform. All it takes is filling the form on their website. You’re not mandated to pay any broker commission or fee, and there’re no hidden charges. But you can make millions without sweat, sacrifice, or restriction.

Yeah right! The whole story is a fairytale. There is nothing like profit here for anybody. The predictions are 0.00% accurate, and the stupid robot has no trading algorithm at all. Once you make a deposit, you’re enriching the thieves behind Bitcoin Evolution scam.

To further buttress our point, let’s discuss some of the reds flags we discovered in our Bitcoin Evolution review.

Bitcoin Evolution scam uses a sales pitch that can convince a careless investor to lose money. We don’t have a problem with that except that other blacklisted scams are using the same sales pitch without any changes. When we discovered this dirty trick, we concluded that these scam apps are from the same sources, and also, they are not trustworthy.

Can anyone really believe that an app that can make millions but doesn’t have a unique voice is trustworthy? We dug a little deeper and discovered that other scams are also using the same pitch and even tagline too. The likes of Bitcoin Formula, Bitcoin Era, etc. are also the same with this dirty software.

All these trading apps have been blacklisted, and we’ve even exposed many of them for what they are-scam! We were very disappointed with Bitcoin Evolution because it’s still from the same band of thieves. So, before you think of investing and making money like they’re promising, think thrice. 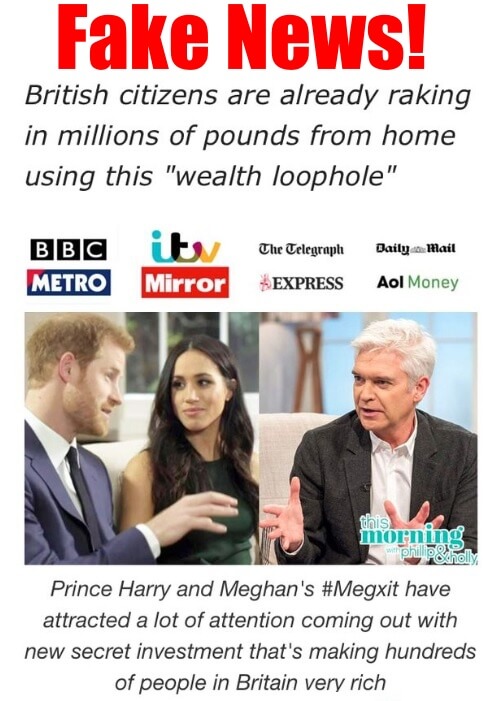 Another red flag we discovered about Bitcoin Evolution is the fake news ads they created. Online scammers as discovered that people fall for what celebrities say due to love and respect. They’re now exploiting that trust to deceive and cheat. The creators of this duping app are spreading fake news online and using celeb’s pictures to sell it.

From our findings, Bitcoin Evolution used the names and faces of respected individuals to deceive traders. Some of the celebrities you’ll find include Prince Harry & Megan, who supposedly revealed a secret investment opportunity that’s enriching the UK populace. We also found some ads with other popular citizens such as Jeremy Clarkson, Elon Musk, Richard Branson, Kate Winslet, Andrew Forrest, TV presenters in Australia- Waleed Aly and Kari Stefanovic. Supposedly, there are lots of others who are supporting and encouraging people to trade with Bitcoin Evolution and make millions.

Lies and nothing but lies. Don’t forget, anyone can lift these pictures online and cause mischief. So, don’t give them a second thought if you don’t want to lose your money.

Here is an old trick of get-rich-quick scams. They attract newbies with promises of money and assurance of winnings. I wonder where such an app exists that will offer 99.4% accurate predictions on trades. But the fools behind Bitcoin Evolution claims to have it and are offering it for free.

According to their claim, the app won an award from the USA Trading Association. To date, we’re still searching for the association and the award they gave to Bitcoin evolution. You can help to search too and drop a message when you find it. We will like to know too.

Apart from the award, they also spewed another rubbish about how Bitcoin Evolution is high tech. Yeah right! What’s high about a junk app that was cloned from other junkyard pieces? The dubious owners couldn’t spend time and little money to create a unique sales pitch. They copy everything from other scams down to the pop-up messages. So, where is high, and where is the tech?

Do the wisest thing, and keep your money safe. All the claims they presented are lies and more lies. 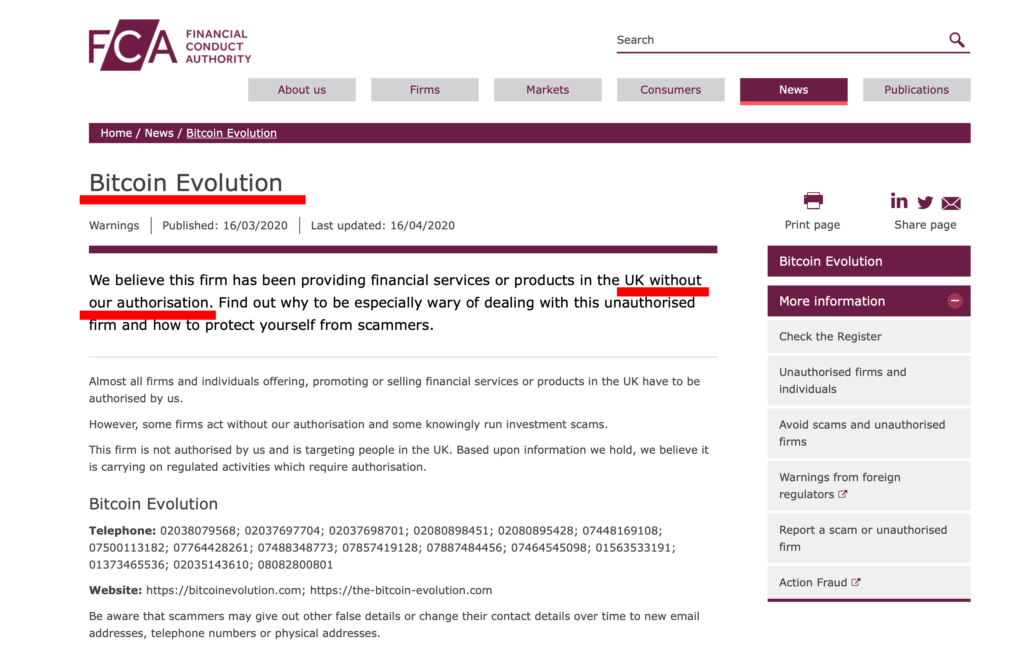 The most interesting discoveries we made is that this trashy app is on the FCA blacklist. The Financial Conduct Authority is in charge of licensing and regulating every financial institution in the UK. Any entity operating without their approval is illegal and dubious. This is why we’re always imploring our readers to trade on regulated platforms and licensed brokers.

If the FCA has condemned and blacklisted Bitcoin Evolution, why will you use it? They miscreants’ claims to be in the UK, but the authority says they are frauds. Is that not a clear indication of their illegal existence?

We’ve always known that scammers who spring up useless apps work with dubious brokers offshore. If you register on Bitcoin Evolution, you’ll be assigned to such a broker who is going to swallow your hard-earned cash. Some of our readers mentioned brokers, such as Prestige Financial Markets. We’ve come across this same broker while reviewing some scam apps, just like Bitcoin Evolution. They never get tired of duping people because it’s the only thing they know.

If you disregard our warnings and still register, you’ll donate your money unwillingly to a camp of fools. No matter the broker you get, they’re all working together. Don’t ever forget it. 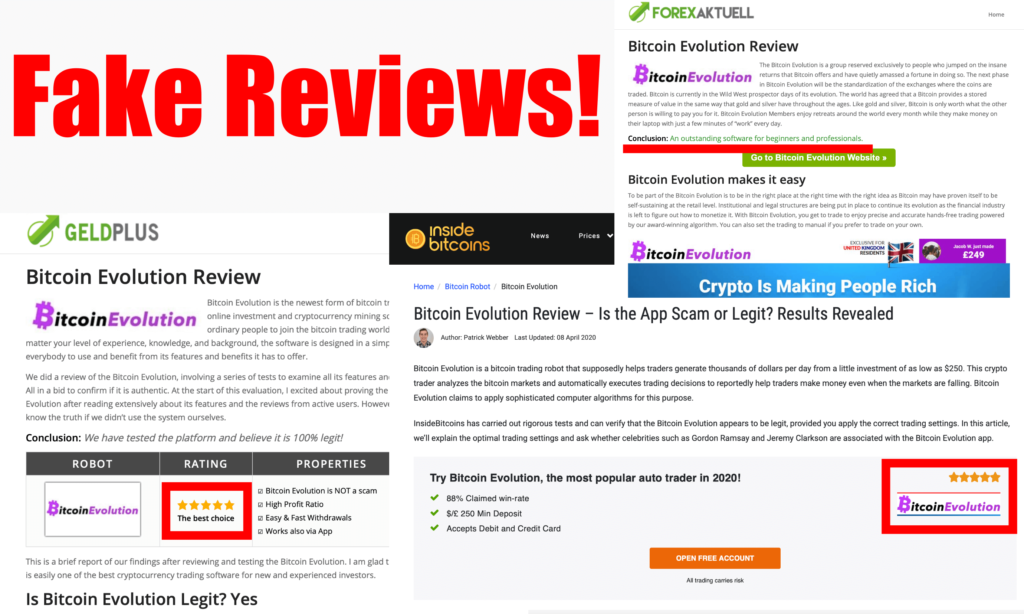 If you’re someone who checks out reviews before considering a product, you may want to be careful here. Some sites are on the web to make affiliate commissions. They’re willing to sell a lie for a small cut. We’ve seen many reviews sites endorsing and even promoting Bitcoin Evolution as the secret to amassing great wealth.

Have you asked yourself why they are not trading on the platform instead, they are encouraging others to try. If there’s such a great wealth for grabs, why are they ignoring it? The truth is that they also know that Bitcoin Evolution is a lie. They’re not about to lose money on such a joke, but they want you to. Please be careful and stay far from some sites with unconfirmed 5-star ratings.

Bitcoin Evolution is out to dupe you. It’s the brainchild of wicked and callous bastards who can sell their souls for money. Our hearts go out to those traders who have lost millions with this crappy robot.

Don’t even bother to register because once you do, they’ll disturb your life with pressure tactics. You may get so many phone calls and messages for investment until you give in. They sell this app as free, but it’s a lie. You must make an initial deposit of $250 to start trading. This is the first money you’ll lose on Bitcoin Evolution before others follow.

We’ve been in this crypto community for years now. Bitcoin is a good investment, but it’s as risky as it is rewarding. It takes some experience and dedication to achieve good results. So, explore other opportunities, and if you must trade, do so with regulated brokers.