Since last year, we’ve been receiving many reports about this new thieving software called “Bitcoin Era” This scam started with all the blasts and gigantic bubbles that lures many crypto traders into a new platform. There were deceitful promises of millions of dollars, high accuracy rates, and longevity. However, it didn’t take too long for the bubbles to burst. But before then, many people have already invested hugely. Some crypto traders who didn’t investigate thoroughly dumped their money into the system and lost them big time. That’s when the real story behind the sham surfaced.

We still can’t believe that some people are holding on to Bitcoin Era in the bid to regain their money. Why waste time on a thrashy robot that is there to lose your money. Sometimes we can’t blame crypto traders, especially the new entrants. If you don’t understand these scammer’s tactics as we do, their fake details, ads, news, promises can make you think they’re the next big thing. But you see, Bitcoin Er is a white-painted sepulcher. If you don’t withdraw yourself from there, they may convince your life savings out of your pockets.

In this Bitcoin Era review, we will be discussing this stupid crypto robot thoroughly. We’ll also try our best to disclose the red flags around it and their implications. If, after reading, you go and try it again, don’t blame us. At least we tried to warn you.

So, according to our investigations, Bitcoin Era is the new scam software or club claiming that they can make traders rich. The thieves mentioned that they have a never-failing automated app that offers a 99.4% accuracy level. If you’re an experienced crypto trader, you’ll know that it’s not possible to get a crypto robot with that level of accuracy. Moreover, their sales video is full of crap, and like others before them, they are using cloned apps too.

One thing worth mentioning is that the scumbags behind Bitcoin Era are civilized and know the importance of marketing. They’ve utilized many marketing tools for this thrashy robot, and if you’re not careful, they’ll convince you to join. No matter how they present it or try to sell it, Bitcoin Era is worthless. We can’t even get any information about the owners, and everything about them smells of fraud.

As you continue below, you’re going to discover some of the red flags we identified regarding this newest sham of a trading robot. It doesn’t have anything to offer, and many traders have lost a considerable amount of money already. Please don’t fall victim to this nonsense. If you’re a newbie, try hard to ignore get-rich-quick offers online. Even if they call you, or send stupid unsolicited emails, ignore them as if your life depends on it.

If you’re still doubtful, let’s bring it closer to you with the following negative aspects of the Bitcoin Era.

One of the stupidest stunts pulled by these scammers is to be duplicating everything. We really don’t understand this approach. Is it that they’re calling us fools or they’re just too stupid? If a smart person wants to sell a scam, we believe they’ll go to some lengths to make it real to an extent. What’s with using one particular video for nine fake crypto trading robot and telling us to come and make millions? We can’t buy the thrash, but many people are falling for it and losing money. As you’re reading this Bitcoin Era review, try to think hard on these aspects.  All the other trading robots using the same slogan and sales video are scams. What then differentiates Bitcoin Era from them? Nothing!

The fools behind these scams are the same. We believe that they keep changing their names and approaches to confuse people. Check, for instance, Bitcoin Evolution is a scam, Bitcoin Secret, another scam, Bitcoin Future, the worst of its kind and Bitcoin Formula, also in bed with others. We also have others such as Bitcoin Revolution, Crypto Revolt, etc. using the same sales pitch from a paid actor and the same software and slogan. 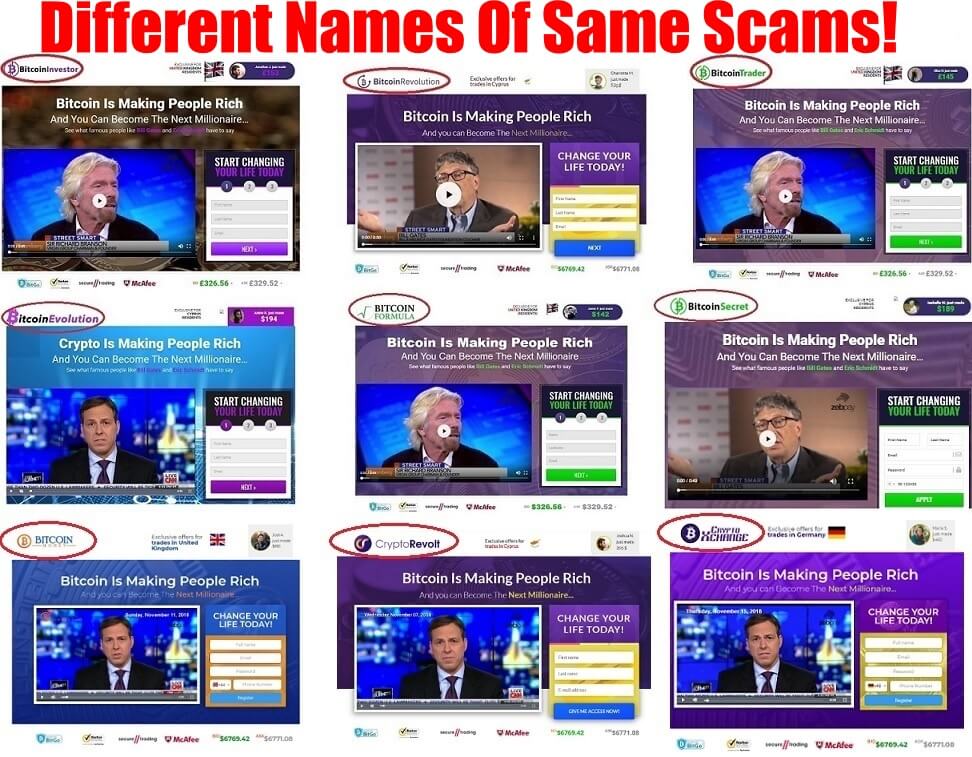 This is such a mess, and we’re just too tired of these stupid child’s play. If not the complaints we’re getting every day from crypto traders, we won’t waste our time on these analyses. These platforms are just too obvious. You can’t consider trading on any of them because they’re pure trash.

I said it earlier; the fools behind these thievery robots understand the importance of marketing. They’ve upped their game by creating fake news adverts to deceive people. It’s not surprising that many people are already investing in the big time. Many of us believe everything we read on the news, and that’s what these scammers are capitalizing on to dupe us. Let me be clear now; not every news ad is real.

You can indeed make millions online, but there’s no short cut to it. You have to work for it and patiently wait for the returns. All those adverts telling you to make money with a newly discovered secret in bitcoin trading are also trying to steal from you. They’re planning to get rich quick, and you’re their source of hitting it big.

So, ignore the stupid Bitcoin Era ad that holds no truth. They’re using celebrities and respected individuals to deceive you. Some of these names you see on the news ads, Gordon Ramsey, John de Mol, James McAvoy, Kate Winslet, Philip Schofield, and many others don’t have anything to do with Bitcoin Era. They made their mark with their skills and vocations, not crypto trading. Even if any of them is an operator in the industry, they’re not affiliated to Bitcoin Era.

Using celebrities to sell fake robots is the new normal. Many scammers are now using this tactic, and because they’re all the same, the trick has flooded the whole crypto community. So, if your reason for registering on the Bitcoin Era platform is because of one celebrity supposedly promoting it, please withdraw right now.

There’re no celebrity endorsements, and people like Sir Richard Branson are not interested in a stupid trading crypto robot. So, think twice before you believe those fake Bitcoin Era ads.

There are many fake reviews circulating all over the Internet about Bitcoin Era. All of these reviews are lies and deceitful attempts to defraud you. There are three parties who’ll do anything to sell scam crypto robots to you. Firstly, we have the owners of these scams who will clone apps, create fake news ads, and hire an actor to spew gibberish in the name of the Bitcoin Era. Then we have the brokers who are the recipients of the investment funds you deposit into the platform. Of course, they’re in bed with the lying bastards and will say anything to get their share at the end of the day.

The other dangerous participants we have are the unscrupulous website owners who’re aiming for affiliate commissions. Once you click on the Bitcoin Era link from their sites and invests, they’re paid some commissions from your money. I hope you know that these people can say anything to convince you, right? So, watch out for them.

Many fake reviews have been circulating online in favor of the Bitcoin Era. There may be few negative reviews now but wait for it. Before long, people’s eyes will open, and the truth will circulate. But don’t wait to be amongst those who’ll lament in the end. Keep your money far from Bitcoin Era scam.

The next red flag is the lack of transparency in ownership of Bitcoin Era. This is another characteristic of scam trading robots. We never get to know the real thieves behind them. Sometimes, they’ll throw out a John Doe kind of name and pass around as the owners.

So, who’s the owner of this wonderful crypto trading robot with a 99.4% win rate? We’re still searching but haven’t found him yet. I bet you, the group behind this dirty robot, are also responsible for all scams online. They are somewhere planning and plotting on how to defraud people. When it seems we’ve exposed on of their dirty robots, they’ll change the name, and start advertising it all over again.

Unfortunately, some unscrupulous individuals are in bed with these con artists online. If the system can offer £979.98 daily, why are they bothering to expose it to the general public?

Bitcoin Era is another cloned crypto trading robot from online scammers. The system is worthless, and the promises are useless. If there is no minimum investment of £250, we won’t bother with them. Unfortunately, many people are losing money, and we can’t keep quiet. Any platform that has questionable characteristics is not worth your time.

Let those behind Bitcoin Era come out from behind the curtains and prove their authenticity. If they do, we can also be their marketers. But they won’t because they’re liars and opportunists. Keep your money away from Bitcoin Era. The trading robot sucks!