Chances are you have heard of the Bitcoin Code. If not, still I am sure the term would look familiar and enticing. After all who among us has not heard or even invested in bitcoins. Bitcoin, the crypto-currency which exists totally in digital form has left most of us with an itch in our palms. Most of us regret of not having bought bitcoins while they were cheap as dirt. So, chances are that you may pounce on the first opportunity that comes your way with the word ‘bitcoin’ in its name. Has the same happened to you in case of the Bitcoin Code? If Yes, then we wish for your mental well-being.

The BitCoin Code Review – It is a Confirmed SCAM!

If you have not fallen prey to this scam, then congrats as you made a wise decision. You chose to be vigilant and check Bitcoin Code review on our blog before investing in it. Those experienced in Binary Options trading can look straight through the lies being propagated. The scammers rely on naive people like you to make a cut in your pockets. Have you just ventured into the world of binary options trading? Were you confused with whether or not the BitCoin Code is genuine or fake? A walk around their website and watching the brainless video should have been enough to filter the truth from the BS! Anyways, now that we have let you know round and clear about this scam, stay clear of it. Read on our Bitcoin Code review as we shred the false lies and promises of the scammers into bits.

Who is Steve McKay?

The handsome guy whose photo you see in the video introduces himself as Steve McKay. He is the so-called CEO and founder of the Bitcoin Code App. Don’t fall for the charming face of this guy. Behind that face, the scammers intend to hide all their crooked actions and conspiracies. The niceties just don’t stop at his face, this guy is giving way free memberships to his App too! Steve has reportedly made $100 million through his software.

A guy so rich and yet unheard of, this happens only in the scammers universe. There is no such person whose credentials could be ascertained. No business magazine or financial bulletin or website mentioned him till date.

We Found Steve McKay with a reverse image search on Google. We were not surprised to find that the guy is not remotely related to Binary Options Trading. Scammers behind The Bitcoin Code scam has stolen this image from the internet. Let alone the fact that he is the founder of a highly successful trading App.

The website reeks of scam from the word go. There is just no sense of professionalism visible on the Bitcoin Code website. Which website have you seen conducting a serious job of trading made in such an unprofessional manner? Just when you try to navigate away, irritating popups obstruct your way. The popups come not once or twice but each time you move your cursor. There is no information whatsoever anywhere except for in the ridiculous video. 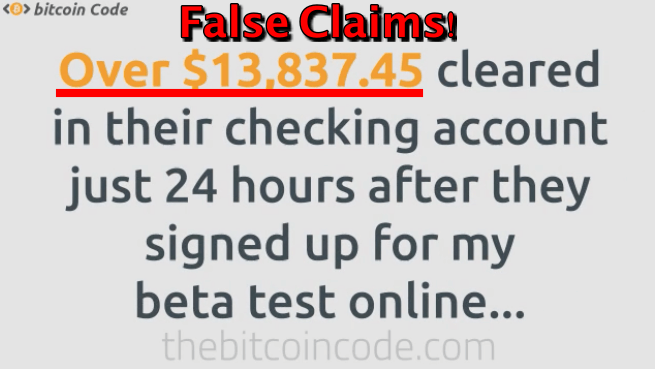 From the looks of it, it seems as if the Bitcoin Code is some wonderful discovery of sorts. Who can imagine a binary options trading system to make such staggering profits in a short span? Experienced traders would despise at the mere mention of the kind of profits people are shown making. Even the best trading software like Option Robot at its very best can make 80-90% winning trades. Outrageous claims of people raking in six-figure incomes in just six months abound in the video. Trading is not a child’s play and no trading software can make such great profits for you. If you come across any such trading system or website which promises so, exit from it immediately.

There neither is any nor can there be such a software which could make $5,000 at the click of the button. 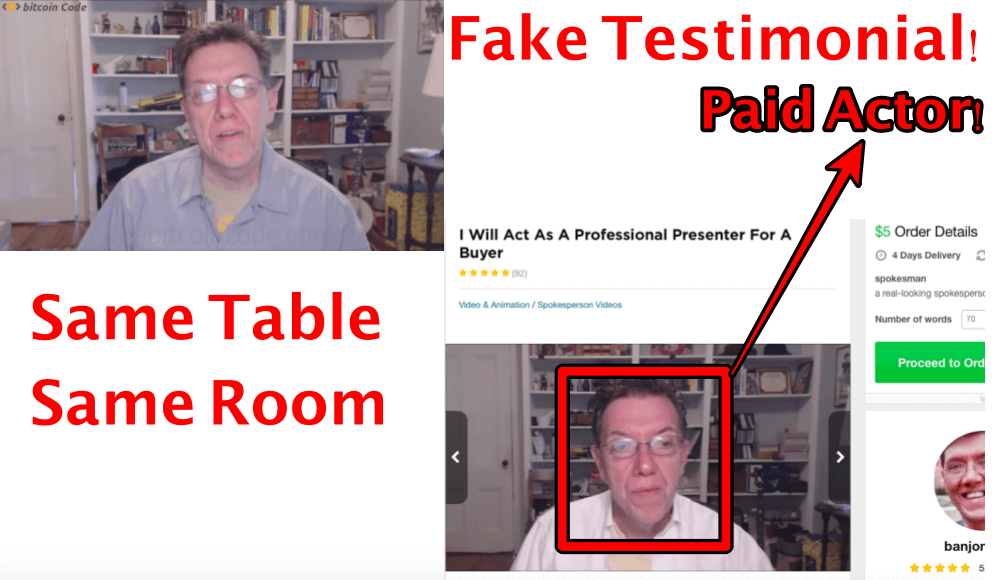 The over excited people who feature in the video are nothing more than paid actors. These people mouth their self made scripts and earn a few dollars in exchange of praising the BitCoin Code. Not just the people in the video, there’s more. The happy faces visible on the homepage are purportedly the genuine comments of the actual users of the App. Anyone who is not alert enough may easily fall for this trap. Their comments do not reflect the truth. The reason being the reviewers are not genuine users. They are just pics of people cunningly borrowed from the Internet.

The easy way to test for the genuineness of such testimonials is to test the images on Google image search.

A message at the top left of the Bitcoin Code scam website prods you to hurry up to sign up for the trading system. The number of vacant places left diminishes quickly. This is all a mean to induce a sense of urgency in the website visitor. In doing this, the scammers want you to commit the mistake of supplying your personal information to them. Later on, when you sign up and feed your account with the ‘minimum deposit’, the plot of these crooks fulfills.

Note that the 99% of the trading systems are fake. Most of such trading systems are made with the only intention of trapping their ‘users’. You have to deal with unreliable and unregulated brokers. Once you make a deposit, such brokers are nowhere to be found. They leave no scope for you to question them or ask for explanations. So we recommend you to do your own research before investing in any trading robot or you can subscribe to our blog via email to get notifications about latest scams.

Update (16 July 2018) – Many scams popped up with the same name “Bitcoin Code”. I recommend all of my visitors to stay away from such scams.

Note :- Our team is getting many scam reports of The Bitcoin Code. If you will join The BitCoin Code, then chances are very high that your initial deposit will get vanished within few hours of trading.

So it was all about the Bitcoin Code review. There is no shortcut to make money or to succeed in life. The scams all rely on the tendency of people to earn money without any skill or hard work. Hope this review helped you in understanding that the BitCoin Code is a SCAM. It’s your duty to warn your family and friends to keep them away from such scams. It is your duty too to stop people from falling for it. The pictures of rich life you are shown on such websites are nothing but an ugly way of tricking you.