The quest for Bitcoin is a risky adventure indeed. If you are interested in making it big in this industry, you must be alert and ready to differentiate reality from mirage. You may not know it, but there are many get-rich-quick scams online like Bitcoin Aussie software. This app joined others of the same category recently and many people as usual rushed to try it. It was quite unfortunate that many traders lost their money because they believed the lies of hungry thieves.

I don’t know if you have heard about it or not but I am writing this Bitcoin Aussie review to warn you that the software is only a scam and nothing more. Those who made the mistake of giving them the benefit of the doubt are crying for losing their hard-earned money to a crappy trading robot.

Maybe you don’t know; online thievery is the latest now. Full-time crypto traders are always on the lookout for scam attempts like what the thieves behind Bitcoin Aussie are trying to do. Before I go further to expose their plans in this Bitcoin Aussie Review, let me tell you what the developers are selling to unsuspecting newbies and novices. 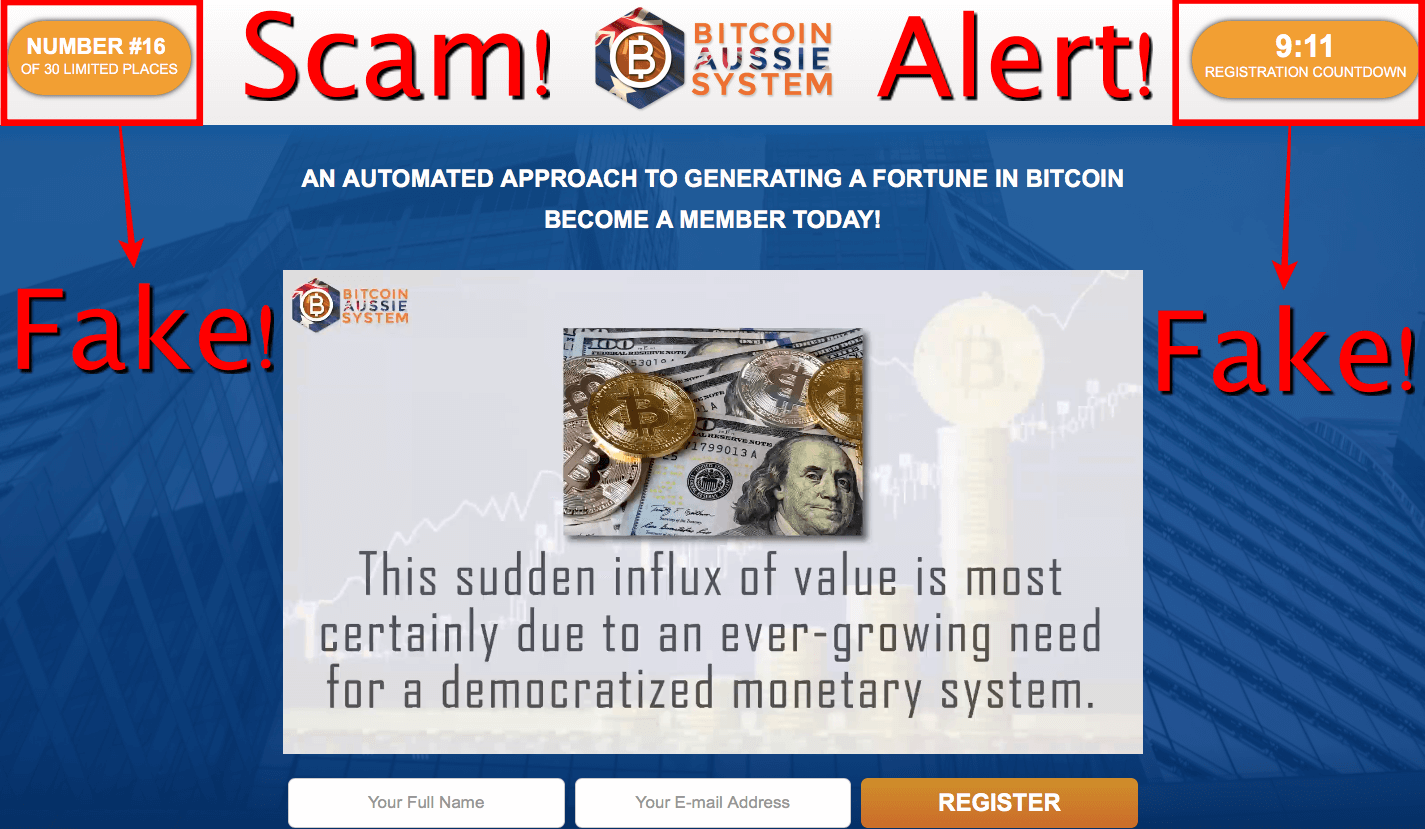 Bitcoin Aussie is supposed to be an answer to the prayers of Australian investors who want to get rich quick from Bitcoin. The software is a brainchild of Jasper Boyle and his team of liars who are out to dupe people for some money. According to the thieves behind the app, it is a fantastic automated trading robot that can enrich traders online. You don’t have to add any effort since there is an automated robot that will do the whole work for you while you relax and enjoy the inflow.

Do you know the fun part, the Bitcoin Aussie system is available for free and anyone can use it anytime. Unfortunately, their claims are very different from the experience which may traders got on the platform. Even though the system is supposed to be free, you will lose money, and there is no way you will make money through their crappy robot.

I know that traders have already lost their money on the useless auto trading app, but you don’t have to be their next victim. Read this Bitcoin Aussie review completely and understand why you should never be curious about the software. There are many dirty tricks which the developers played, but unfortunately for them, we are smarter than them. Check out some of them:

The developers lied about the users 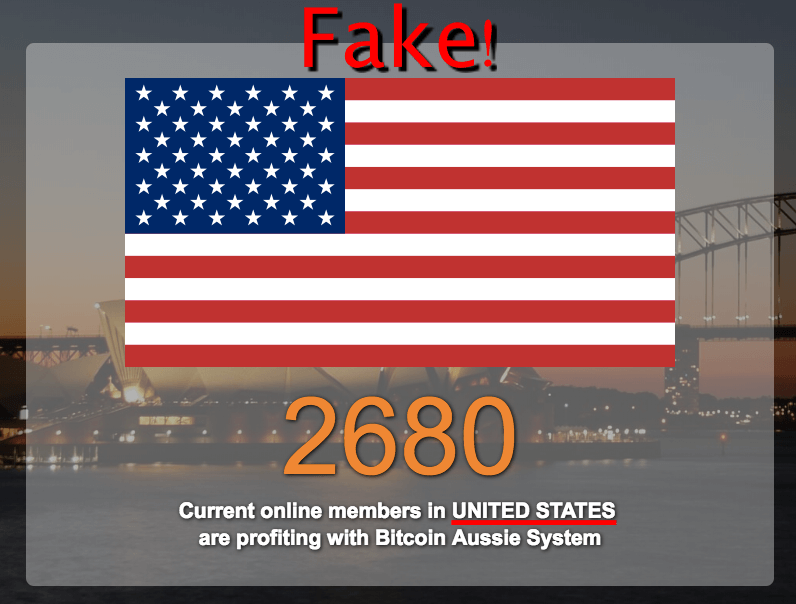 Many indicators show that the creators of this Bitcoin Aussie System are liars, but the first one you will notice is that they are claiming to have users in every country. No matter the country you reside, the website will show that they have users there not minding where you are you are residing. In fact, they killed themselves when they showed users from United States which we all know had outlawed automated binary options/crypto trading platforms.

I don’t think that they thought about it thoroughly before using that type of strategy to lure traders. Maybe they didn’t know that there are investigators like us who will scrutinize every detail to make sure that investors don’t lose money to them.

Another lie I discovered on the website is that the voice narration kept saying that Bitcoin is rising and almost hitting the $20,000 mark. Such a terrible lie makes me angry because those who are participating fully in the industry knows that the cryptocurrency has been on the decline since this year. Where did they get such information? This lie shows that they don’t know anything about Bitcoin or other digital currencies. The currency has lost 63% value since after the rapid increase last year that took everybody by surprise. So, what are they saying?

An accuracy rate of 99% is impossible

When you see an app that is offering a risk-free trading opportunity, I want you to run away. I know that there are many fakes systems online, but there are also legit ones that are offering real-time trading opportunities. These legit cryptocurrency trading apps will never assure you of a risk-free ride to millions. They know that the whole trading operation is risky and that’s why they will even provide a free demo account for you to practice before you trade with real cash.

Now tell me, if the systems that are legit, regulated and registered will not give you such a high accuracy rate, why are the nincompoop developers saying rubbish? The temptation to believe them may be higher than reason sometimes, but you must be careful. The accuracy rate they are offering is not real and if you don’t know that yet, go back and study the intricacies of online cryptocurrency trading with automated robots.

The Bitcoin Aussie system is filled with fake reviews 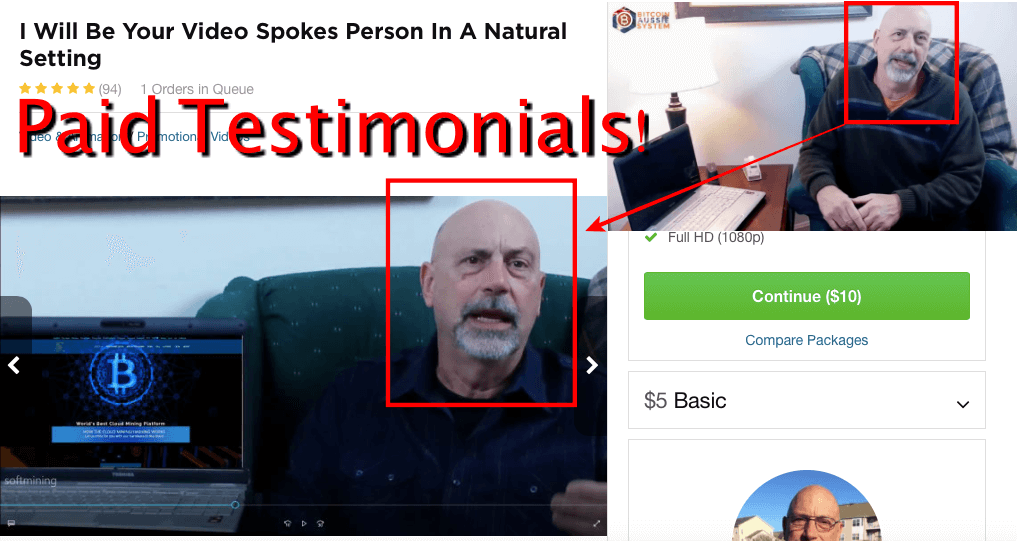 When you watch the Bitcoin Aussie system’s video, you will see many people who are claiming that the app works and has paid them. Don’t mind those people because they are all actors who are seriously working for their money and nothing else. Also, there are some testimonials available on the site to deceive you. Don’t give it a thought because those pictures you see are not real but stock photos which the thieves copied to create lies as reviews. 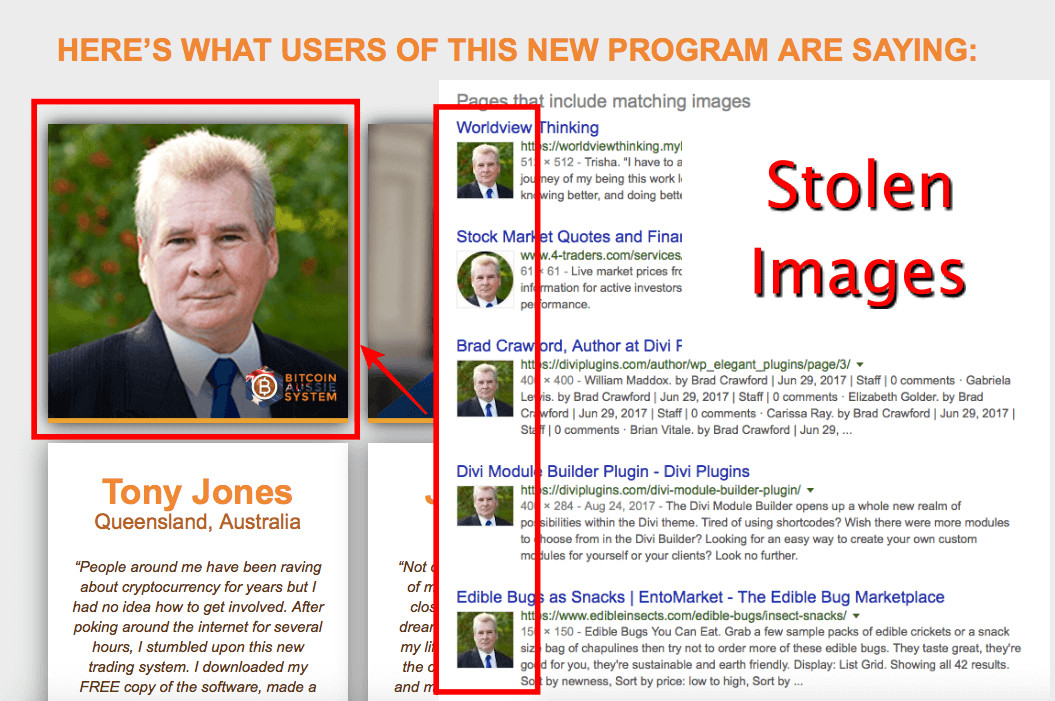 When you do a little research about the people endorsing the software, you will discover that they have no relationship with cryptocurrency trading. My advice to you is that you should not pay attention to Bitcoin Aussie app because it will help you to lose money and enrich scammers.

The developers are using pressure tactics

Any system which tells you that the offer is limited or that the chances remaining are few, avoid them at all costs.  We call this marketing strategy a cheap trick or pressure tactics to deceive newbies online. On the Bitcoin Aussie system website, they tell visitors that there are 15 spots available for them and you will also see the clock that is counting down as if the time is short. Kindly ignore the fools because if you still visit that site in a month’s time, the spots will be there and the clock will continue ticking.

If you don’t believe me, try refreshing the page and see how the number and the clock will go back to their starting point and start counting down again.

The system has an anonymous owner

Anybody can come up with a stupid name online, after all, there is no law on forming names. The name Jasper Boyle is completely fictitious and very phony. I am saying this because they didn’t show him to us and neither did they provide anything that will prove that he is real.

So whoever is behind the curtains running this Bitcoin Aussie system scam is a thief and a deceiver. I wonder why anybody will believe in such a system and lose their time and money. If it has to do with business, there should be transparency and not secrecy. No Jasper is running the system. He is a fictitious character that was created for this app alone.

There is no mention of how the system works.

I have come across some apps which the owners claim to operate with heart-moving, ground-breaking and world-rocking algorithms for profitable trading. Although their claims are usually a bunch of rubbish, at least they try hard to convince traders. When it comes to Bitcoin Aussie system, there is no explanation about the inner operations of the software that offers 99% accuracy rate. Nobody tells us how the system will generate profits apart from the advanced tech they mentioned.

Let me ask you, what advanced technology are they using? What traders want to know are the analysis tools, algorithms, trading strategies and the market indicators which the app uses to be accurate in trading? Well, I didn’t find anything not because I didn’t try but because the crooks have no explanation to give.

Verdict – Bitcoin Aussie System is a scam! Avoid it!

Best Binary Options Trading Robot Of 2018 With An Avg. ITM Rate Of 83%

Like every other get-rich-quick scam, the Bitcoin Aussie system has everything it takes to qualify as a dangerous app. I always do my homework so that my clients will rely on my findings. There is nothing good about this software and no matter the temptation; you should not register on this platform.

There are legit apps for you to trade and make the little you can gradually. Visit those legit systems and do things right.