Are you looking for honest Aurum Tech review? Well, then you are at right place. Today I will be exposing this dirty scam with proofs. Truly speaking, it is just another binary options scam which is recently promoted via some shady e-mail marketing spammers. From the beginning of the pitch video of Aurum Tech, you will see Mr. Marco Pierre Shoemaker making bogus claims of unrealistic profits of thousands of $s per day. In the whole pitch video, he is showing overnight millionaire dreams, which we all know that it is impossible. This site is full of fake promises and dreams which never comes true. If you are seeking to earn money in online trading, then Aurum Tech is a big NO! You will lose all of your initial deposit within few hours via Aurum Tech. So without wasting a single second further, let’s move to our Aurum Tech Review in which we are going to expose this money making scheme with proofs.

Let’s start with the claims made by Mr. Marco. He is claiming that you can easily make millions of dollars using Aurum Tech software each month just by an initial deposit of $250. Really? It’s just a scam tactic to lure all innocent people by promising them huge profits, showing them Porsche. He claims that his software Aurum Tech is able to predict all winning signals. In other words, he claims that Aurum Tech is having an average ITM Rate of 100%. Even, best auto traders like SnapCash Binary & Code Fibo are not able to even reach 90% winning rate. So do you really think that a new auto trader which is launched yesterday will have 100% winning rate? Ofcourse not! 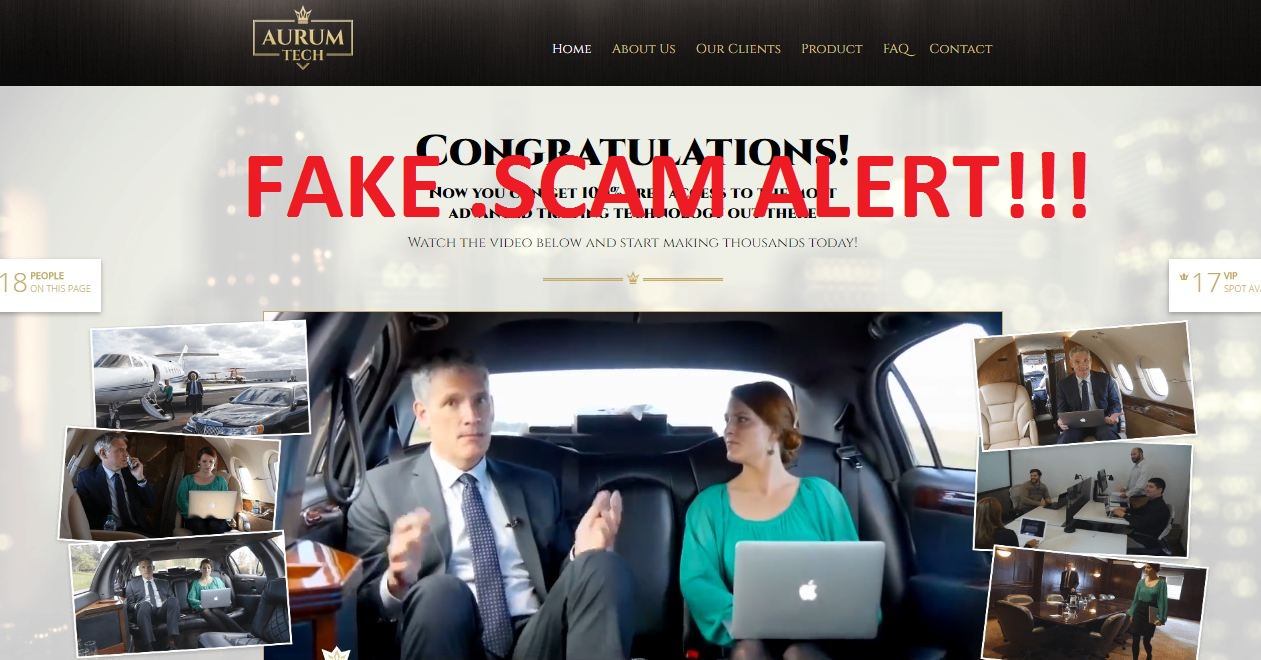 Even the CEO of Aurum Tech system is FAKE. Yes! You heard that right! During my investigation process, I was unable to find or trace the physical location of his company – Aurum Tech Corp and even the existence of Mr. Shoemaker. In the video presentation on the site, he played such a dramatic role which seems that he is living a luxurious life. But believe me, his appearance and his lifestyle are totally fake. He is just an actor which gets paid by those shady scammers for reciting their words.

Why To Avoid Aurum Tech Scam?

Below I am compiling all shreds of evidence and proofs which will be enough to name it as a fraud and fake trading robot.

Mr. Shoemaker is just a fictional character which does not exist in this world. This same actor was seen in many other popular scam systems like Push Money App earlier. Moreover, if we tried to find about him on any social networking site or on any magazine but we were not able to trace single word about it. So do you really think that any guy who is making millions of $s a month will not have any information about him on web?

In the website of Aurum Tech, you will find some clients who make a truckload of cash by this software. Well, don’t believe them as those images are just stolen from random websites. Undoubtedly, it’s one of the most common tactic used by most by most of the scam robots. The story does not end here. We can still give you many reasons to avoid this binary options scam.

Mr. Owner says that anyone can earn 187,981 dollars in a day via Aurum Tech and also claims that his software is having ITM rate of 100%. This statement is totally bogus and fabricated as it’s impossible for any auto trader to have winning rate higher than 90%. As a binary options robot can never get latest market news which can affect binary options trading. This type of unrealistic thing is possible only from scammers. So never trust in any of their testimonials and statements.

He claims that this millionaire-making software is also available in App version for iOS, Android, and Windows phone. I have searched for this App in every trusted app source as Google Play  Store, Apple App store, Windows store but I didn’t find this app in any of those stores. So why they are claiming to have app of their website? Well! It’s just another fake claim of Aurum Tech which is busted by us.

All the above proofs that I have listed is enough to show that Aurum Tech is a fraud. If you are seeking to earn money in trading platform, then choose a legit software. You will find many fake sites as Aurum Tech in this trading market. So be aware and keep away from this site. They are providing fake service, and their only motive is to lure your hard-earned cash. I hope this Aurum Tech review helped you in taking right decision.