The 50K a Week scam by Josh Harris has re-entered the Binary Options industry. It is of great importance that you read our full review regarding this treacherous trading software. We have compiled some crucial evidence that we encourage all traders to examine, before considering depositing any money with them. Chances are that either you or someone you know may have already been cheated by this deplorable system. Our plan for releasing an authentic 50k a Week review is to blow these guys out of the water once and for all. We hope that this time round, we can save you a couple hundred bucks.

Josh Harris the alleged founder of the 50K a Week software, claims to have come from a poor family background. He also states that he used to work for a small start-up company called GeniusTech, which conveniently no longer exists. During the time he worked for them, they were purported to have been working on a genius algorithm for trading on the stock exchange, but went bankrupt before they could complete there ‘magician software’. But not before they pointed Josh & his team in the right direction to complete their scam. 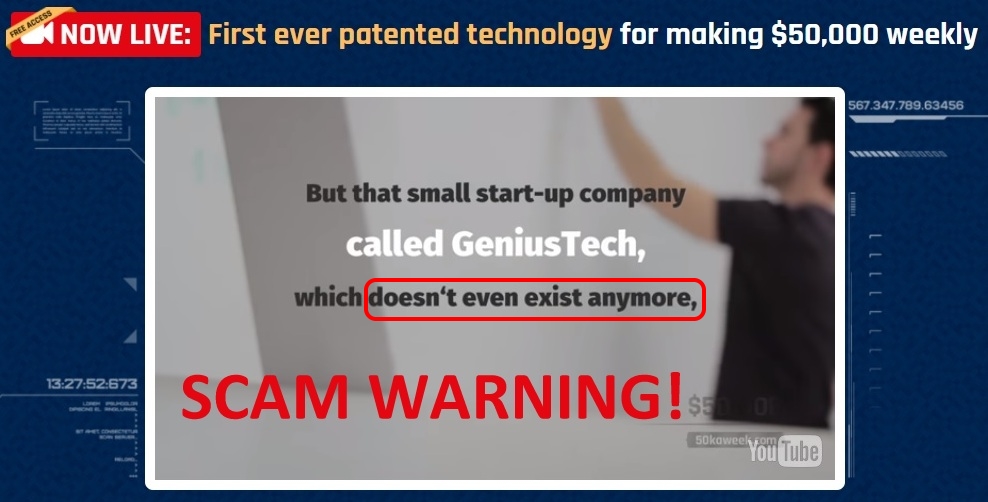 Josh and his imaginary team of three apparently used to call themselves the ‘Justice League’. Together it took them three years of struggling, working at McDonalds during the day and labouring on the trading software at night until they finally got it right. Now Josh claims they are millionaires living the dream life, driving fancy cars and partying all the time.

If this sounds a bit like a fairy-tale to you, then your thinking would be correct. There is not one shred of evidence to back up anything he said. Perhaps even more concerning is the fact that Josh Harris does not exist. During the pitch video, there is no real person shown in order for us to investigate his actual identity. In the case of 50K a Week scam, he is simply a voice with a stolen name trying to offer you a scam service. The only Josh Harris found on Google was some well-known man who has something to do with internet marketing.

50K a Week Software is supposedly looking for new partners to lend them a helping hand. They are in need of good references, feedback and testimonials, and so they need 60 people to help them test their software before giving it to the general public at an astounding price of nearly $7000. Of course, we are told yet again, that all we need to do is enter our email address and we will be of the unlucky few to acquire the fake trading app for free.

This scam software supposedly works like an artificial super brain that analyses all movements on the markets with the probability of 99.9996% meaning that if the app says a specific trade is good then it’s good, no questions asked. Josh says that if you follow all the signals that 50KaWeek gives you, and trade on them, then your bank account can grow in much the same way his did back when they started in 2012. Here is your second red flag!

The Fake Mr Harris states that they started earning profits back in 2012. However, when we were gathering evidence for our 50K a Week review, we found that this fraudulent site was only registered on the 21st June 2016. How then were they making enormous amounts of money on the stock market with an unregistered & unlicensed trading software since 2012? 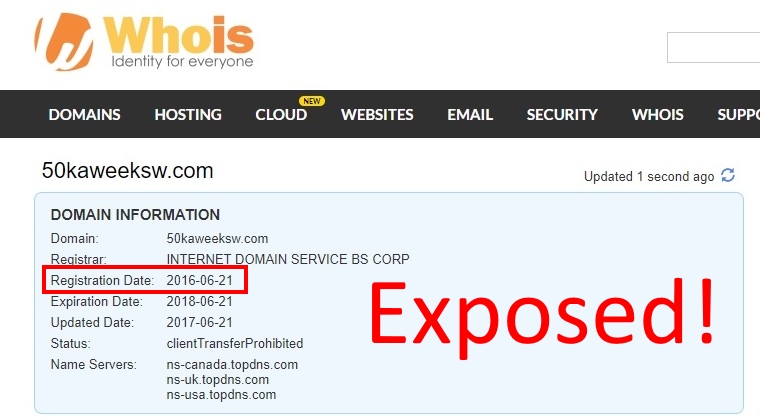 Another disturbing issue we found during our review investigation is if one takes a closer look at the counterfeit 50kaweeksw.com website, you will soon notice that the con artists behind it have designed the site to be more like a squeeze page. What this entails is that, aside from the obviously dishonest promotional video, there is little to no information provided. This is utilized as a highly deceptive tactic for convincing viewers to enter their email address in the space provided in order to gain more information on their scam offer.

Once you make the mistake of providing them with your email, they will officially have you on record as an interested party and will continuously spam your inbox with scam services from that moment on. Sometimes, even unsubscribing does not help. They are relentless.

We could go on and on about why you should avoid the 50K a Week Scam software, and why you should never trust a system such as this one after reading our review. It really doesn’t matter how much more evidence we can bring to the table, because at the end of the day, our conclusion will still remain the same. The simple fact that the system was first released last year in 2016, during which a magnitude of newbie traders fell victim to this disastrous scam is evidence in itself. Do not be misled and deceived by their dirty tricks.

Are You From US? Then You Should Join BinBot Pro For Trading!